The following article appeared in the Missouri State Sports Guide. Download the full guide below. 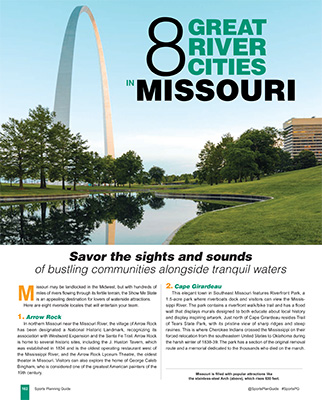 Missouri may be landlocked in the Midwest, but with hundreds of miles of rivers flowing through its fertile terrain, the Show Me State is an appealing destination for lovers of waterside attractions.

Here are eight riverside locales that will entertain your team.

In northern Missouri near the Missouri River, the village of Arrow Rock has been designated a National Historic Landmark, recognizing its association with Westward Expansion and the Santa Fe Trail. Arrow Rock is home to several historic sites, including the J. Huston Tavern, which was established in 1834 and is the oldest operating restaurant west of the Mississippi River, and the Arrow Rock Lyceum Theatre, the oldest theater in Missouri. Visitors can also explore the home of George Caleb Bingham, who is considered one of the greatest American painters of the 19th century.

This elegant town in Southeast Missouri features Riverfront Park, a 1.5-acre park where riverboats dock and visitors can view the Mississippi River. The park contains a riverfront walk/bike trail and has a flood wall that displays murals designed to both educate about local history and display inspiring artwork. Just north of Cape Girardeau resides Trail of Tears State Park, with its pristine view of sharp ridges and steep ravines. This is where Cherokee Indians crossed the Mississippi on their forced relocation from the southeastern United States to Oklahoma during the harsh winter of 1838-39. The park has a section of the original removal route and a memorial dedicated to the thousands who died on the march. 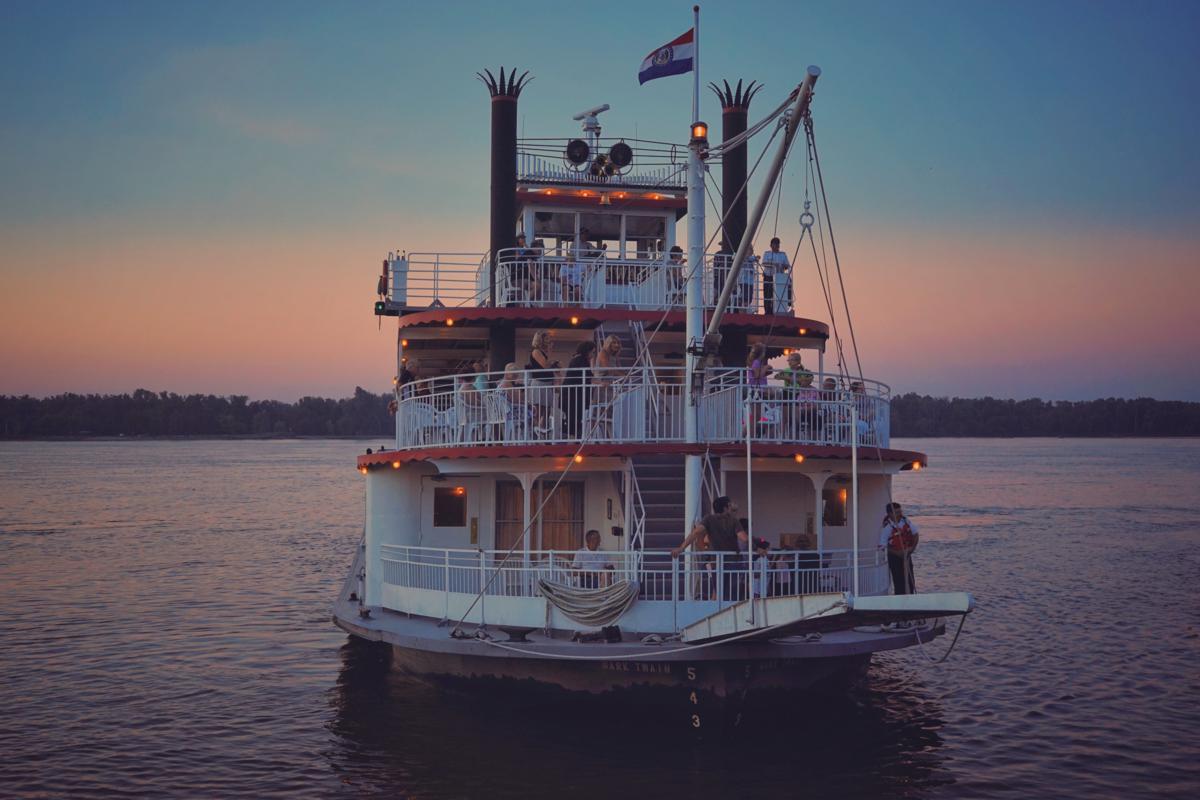 Hannibal, 100 miles north of St. Louis, is all about Mark Twain, who grew up there as Samuel Clemens and went on to become one of America’s foremost storytellers. Groups can tour the Mark Twain Boyhood Home and Museum, which encompasses several Main Street properties related to Hannibal’s famous son and characters from his books. A Mark Twain Riverboat cruise and tour of nearby Mark Twain Cave, immortalized in The Adventures of Tom Sawyer, round out a Hannibal visit.

This little town is nestled among the rolling hillsides of the Missouri River, in a countryside reminiscent of Germany’s Rhine Valley. Specialty tracks can include shopping tours, a village tour with music or a visit to Hermann Wurst House, a shop that makes German sausages and smoked bacons. The arts and crafts of yesteryear are well preserved in the Historic Hermann Museum at the German School. Built in 1871, the building served as Hermann’s elementary school until 1955. Hermann’s Stone Hill Winery offers tours of the largest series of underground cellars in North America. Its Vintage Restaurant occupies a beautifully restored carriage house and horse barn. 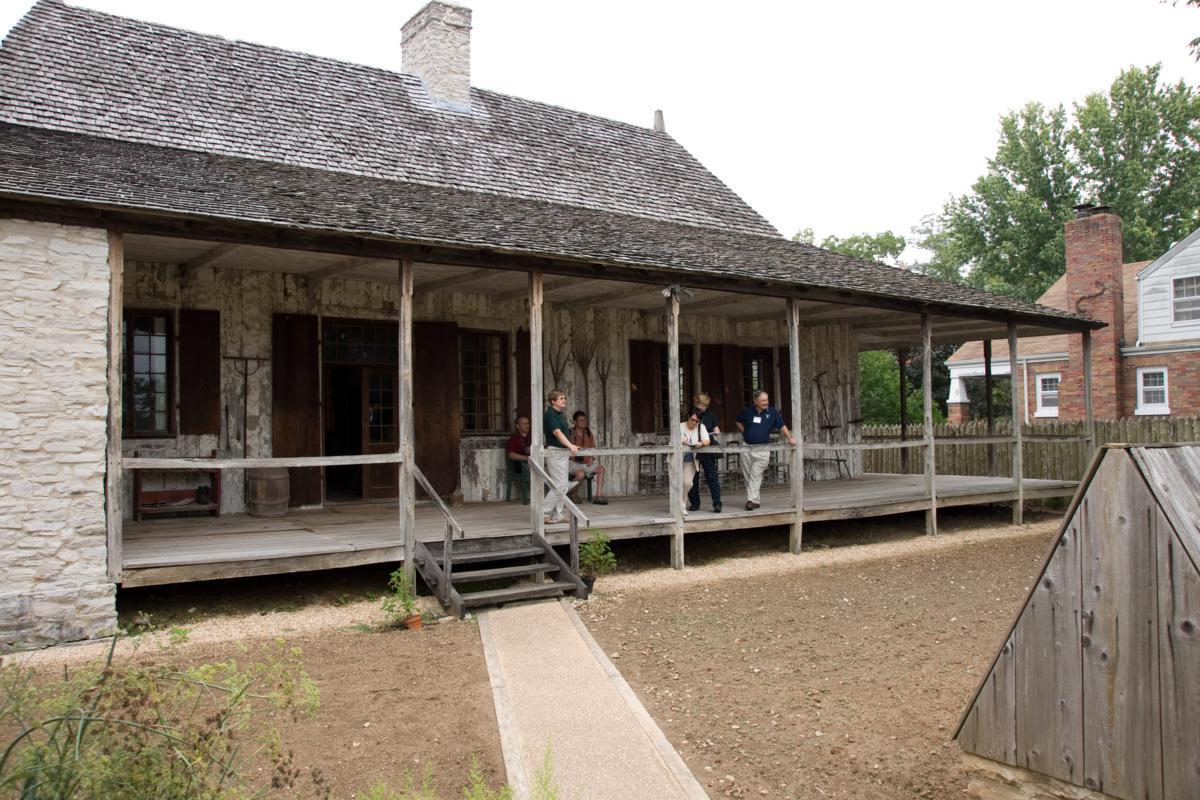 The shores of the Mississippi River are awash in history and a natural place to visit is Ste. Genevieve, the oldest town in Missouri. The town’s French character dates from the 1740s when the region was part of a vast territory held by France. Several buildings from the French colonial era, like the 1792 Louis Bolduc House, are open for tours. Located an hour south of St. Louis, the quaint town of 5,400, a National Historic Landmark, abounds with art galleries, gifts and antique shops.

Hoofbeats of the Pony Express seem to echo in St. Joseph, a river city an hour north of Kansas City. A legendary chapter in American history that began on April 3, 1860, the short-lived transcontinental mail service between St. Joseph and Sacramento, is enshrined in the Pony Express National Museum, which occupies the stables from which riders left on horseback. The Pony Express office was at the Patee Hotel, now the Patee House Museum. Besides the re-created Pony Express office, you can see vintage autos, fire trucks and train cars, plus a street filled with model shops and offices from the early 1900s. On the Patee House grounds is the Jesse James Home, the scene of the outlaw’s death in 1992 at the hands of a fellow gang member. See the bullet hole in the wall and artifacts from his grave.

St. Louis’ $380-million CityArchRiver project seamlessly connects downtown with the Gateway Arch and riverfront. The stainless-steel Arch, rising 630 feet from a forested park set above the banks of the Mississippi River, is part of Jefferson National Expansion Memorial, the area for which was designated a National Historic Site in 1935. The Arch is the tallest manmade monument in the U.S. and commemorates America’s westward expansion in the 19th century. Those visiting the Arch will find new landscaping along with a new visitor center and museum. Those seeking a different view of the Arch and St. Louis’ skyline can travel through time on a replica 19th century paddle-wheeled riverboat. Day or night, riverboats offer stunning skyline views while cruising on the mighty Mississippi