Good vs. Evil – Monday Huddle Up 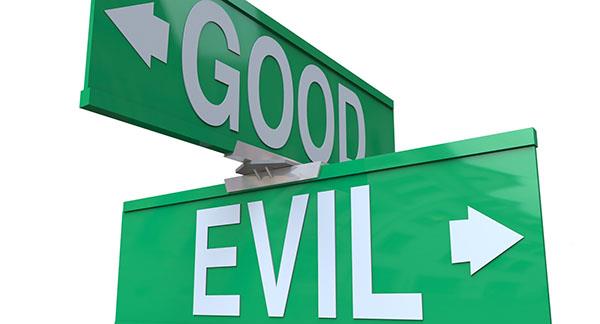 On a recent flight to the Midwest, I encountered a very, shall we say “challenging” individual.  The gentleman in question was sitting in my row and upon his arrival on the plane he immediately went into a negative rant about how the airline we were on (US Airways) was “the worst airline ever” and that their flights were “always late.”  As it turned out, he had a challenging connection that day, and he came to the American Airlines – US Airways merger from the American side of the ledger.  Never mind that US Airways bought American our of bankruptcy (not the other way around) and that the CEO of the new entity is the former CEO of US Airways Doug Parker (again not the American CEO), for some reason this gentleman had an axe to grind with the airline in charge.  But I digress…..

It just so happened that the night prior my original flight on this itinerary had been cancelled which changed my travel plans rather abruptly.  But to be honest, the cancelled flight was a blessing.  I got to spend an extra night at home with my family, and for those that travel a lot, a cancelled flight can be a positive thing sometimes.  So even though I was as inconvenienced as much if not more than this other gentleman, I took the glass half-full approach.

So here is the punchline to this story.  When the flight was nearing its end, someone asked the man in question what he did for a living.  His response?  “I’m a consultant.”  WOW.

No matter the industry, what type of firm would hire a consultant that is so toxic that others around him are offended by his actions?  As a consultant myself, I will make you this promise: The day myself or anyone on our team is as negative as the gentleman on the plane, we will shut it down and go do something else.  Nobody needs negative people around them, especially those that impose their pessimism on people that didn’t ask for it.

You will always get more with honey than with vinegar.  Especially when the chips are down and stress levels are high.  Those that are respectful, polite, and considerate of others will get a lot further in life than those that resemble the challenging traveler in this story.  Good will always prevail over evil.