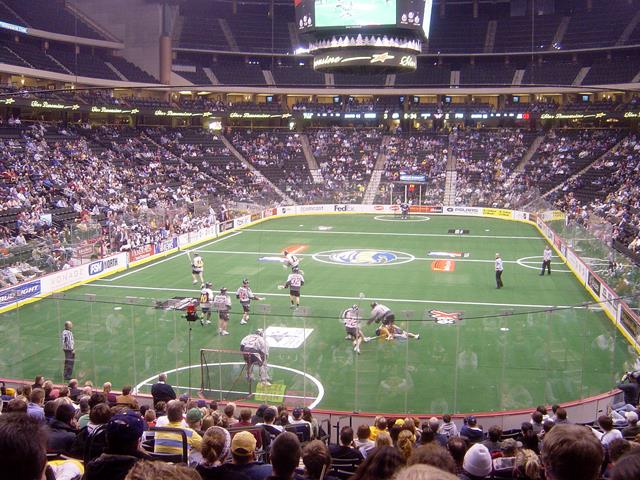 Soccer has been played by Americans for decades. With millions of Americans partaking in the sport, soccer is the third most played team sport in the U.S. Giving it a good run for its money, lacrosse is currently the fastest-growing sport in America. The sport took off in the early 2000s and has now touched cities, schools and sports complexes nationwide. Maryland Soccerplex & Discovery Sports Center in Boyds, Maryland saw this emerging popularity and ran with it, creating a complex versatile enough to host soccer and lacrosse tournaments using the same fields. What first attracted them to the idea of lacrosse fields was the surpassing of lacrosse over other sports in Maryland and the lack of good, well-kept facilities available to lacrosse players.

Maryland Soccerplex started the transition by hosting girls lacrosse tournaments to discover the wear and tear the fields would experience. The Soccerplex equates girls lacrosse to boys soccer, which creates less damage to the fields than boys lacrosse. Played more aggressively, boys lacrosse tournaments are held on bermuda grass and turf fields, which are easier to patch up after an intense tournament weekend. This provides 10 usable fields for boys lacrosse games. Having the same perimeter lines, soccer fields are the ideal match for lacrosse. To make the fields playable for both sports, and keep them in the best condition, the fields are shifted to reduced damage in one area. The goal mouths for lacrosse are shifted from where the goal mouths of soccer would be located. Because of the combative activity that takes place near the goal area in lacrosse, the goal mouth is filled with sand to protect further grass damage. This is then blown out once the games are over. The goal nets and field lines are also changed to accommodate the different sports.

Not only do alterations need to be made to the fields, the differing cultures of soccer and lacrosse require adjustments during tournament seasons. Trisha Heffelfinger, executive director of Maryland Soccerplex, describes soccer tournaments as “comes for the competition” and lacrosse as “comes for the experience.” Even soccer coaches seem more particular, stressing their players are there chiefly to compete. Lacrosse, in addition to competition, brings festivities, with music, food, tailgating and vendors. At the Soccerplex, lacrosse tournaments have a “vendor village” with food stands and paraphernalia. This festival-like atmosphere seems to attract more people than most tournaments. Heffelfinger mentions some difficulties in hosting lacrosse tournaments, such as the extensive labor that is required to alter the fields. The large crowd that lacrosse attracts does limit the available parking, especially because it’s made into a weekend experience. But, lacrosse tournaments bring more income, energy and customers to the complex.  Because the sports are played in different seasons, soccer tournaments usually go for three days (Friday-Sunday) while lacrosse season, stretching over the summer months, is usually four days long (Thursday-Sunday).

Local businesses in the Boyds area do well with both sport tournaments, according to Heffelfinger. Soccer and lacrosse groups seem to spend around the same amount. When players have a break, they go to restaurants and movies. Since the Soccerplex hosts a lot of girls lacrosse tournaments, shopping is a popular activity, with many malls in the area. Maryland Soccerplex & Discovery Sports Center’s ultimate mission is to provide the best environment for players and guests. The complex manages and maintains 24 soccer fields. It also has an indoor facility that hosts indoor field sports such as basketball, volleyball, rugby and field hockey. Despite difficulties, expanding the complex for lacrosse use has brought experience and a bustle of people to the Maryland Soccerplex. At first it was tedious, but Heffelfinger says they have become much more efficient at accommodating for soccer and lacrosse tournaments. For more information on Maryland Soccerplex & Discovery Sports Center, contact: Trish Heffelfinger, trish@mdsoccerplex.org, or visit http://www.mdsoccerplex.org/index.html. −By Susan DiLillo