The Eastern Shore region of Maryland is vast, covering land and water along the entire eastern coast of the state in Cecil, Dorchester, Talbot, Wicomico and Worcester counties as well as Ocean City. One can find hundreds of miles of coastal and bay shoreline, hosting aquatic events that are unparalleled. From the top of the region, a revitalization of historic equestrian space becomes the home of the Fair Hill International’s and the world’s next CC15* in 2020. Down the road from Fair Hill Special Event Zone & Fair Hill Training Center lies a burgeoning gem in Calvert Regional Park, a sports destination for human athletes to compete on natural terrain.[/one_half_last]

Descending the eastern coastline of the Chesapeake Bay, the Choptank River provides sailors and triathletes a demanding venue to hone their skills and craft. This year the Choptank was the scene for the 2018 Star Worlds and IRONMAN Maryland; the latter has become the perennial hit on a multitude of levels but most importantly for athletes. The 2017 race garnered the #1 ranking in overall global athlete satisfaction along with top 10 rankings in best post-race celebration, best overall bike, recommend to a friend, best race food, best host city experience, run course and overall swim.

Back on terra firma, the Governor’s Challenge basketball tournament has become a behemoth; the event is now the largest in the country. But the southern point of the Eastern Shore has not forsaken its roots; original budding events like the USSSA Eastern World Series have a permanent home all across the southern point of the region- all the way to the Atlantic Ocean. Between the renovated and expanded Henry S. Parker Complex, North Worcester Athletic Complex, miles of sand & surf and 214, 000 sq. ft (and expanding) of convention space, the bottom of the region is not to be discounted as a sport tourism mecca.

The Central region is home to the state capital and sailing capital of the world (Annapolis), the largest city and independent city in the state (Baltimore), and national governing body US Lacrosse. But moreover, the Central region is the intersection for millions of people criss-crossing the state or nation for business, pleasure or sport. Compromised of TEAM Maryland partners  Baltimore, Harford, Baltimore City, Howard and Anne Arundel counties, this region is home to several events of many varieties that offer something for everyone. Some may known the region best through their love of equestrian sports, including the perennial powerhouse Preakness Stakes or steeplechase races throughout the counties. Or perhaps through the many lacrosse events throughout the region at venues such as Cedar Lane Regional Sports Park, or upcoming events 2019-2022 NCAA Division I Women’s Lacrosse National Championships at Johns Hopkins University and Towson University or 2021 FIL Women’s World Cup at Towson University. Soccer players of all ages know the region too for its magnificent pitches at Covenant Park, Blandair Regional Park or M&T Bank Stadium.

Beyond the turf lies the great expanse of the Chesapeake Bay, site of the fifth largest 10K in the nation, Across the Bay 10K. Just inland from the bay hides a nationally ranked BMX track- Chesapeake BMX– and the US Naval Academy. With all of that packed into one region, it’s easy to see why some say the region is the heart of the action.

Encapsulating Maryland’s half of Washington DC’s boundary, the Capital region of the state has become more than a gateway to the Nation’s Capital. Ideally positioned around DC, TEAM Maryland partners Montgomery and Prince George’s counties are frequent hosts of national and international competitions of all shapes and sizes. The Maryland SoccerPlex hosts numerous youth soccer and lacrosse events as well as being home to the Washington Spirit, the professional women’s soccer team. Another pristine venue located in the area is the Prince George’s Sports and Learning Complex; earlier this year, PGSLC hosted the USATF Masters Indoor Track & Field Championships.

Along the banks of the Potomac River many of our nation’s best perfect their skills in kayaking/canoeing in completely natural setting. A little further down the Potomac lies National Harbor, an ever expanding destination for sport tourism and home of the Scripps National Spelling Bee.

Surely not to be missed are FedExField, located on the same grounds as PGSLC, and Maryland’s flagship university in College Park.

Rich with history and charm, the Western region of Maryland offers a plethora of challenging outdoor venues along country roads, the Appalachian Mountains or through deeply historic city centers. Located on each side of the Appalachian Trail, TEAM Maryland partners Frederick and Washington counties boast picturesque but strenuous cycling routes all around, as well as intricate trail and road running routes of any distance imaginable! The farmed (and only remaining) JFK 50 Mile Ultramarathon has been taking place since 1963, takes advantage of nature’s offerings for a great course through the mountains.

A range of mountaintops in the region were used as a canvas to create a man-made treasure, a mountaintop whitewater course- the only one in the world. The venue- Adventure Sport Center International– was the cite of the 2014 ICF Canor Clalom World Championships. For pursuits on two wheels, look no further than the West as well; cycling is huge in the western region, with the USA Cycling Amateur Road National Championships, Gran Fondo Maryland, Tour de Frederick and several others calling Frederick and Washington home. 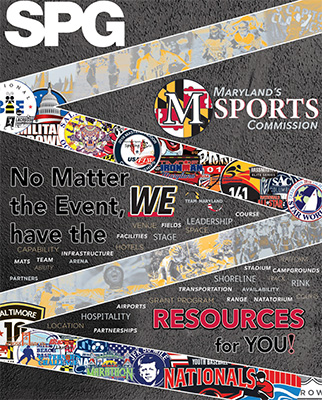