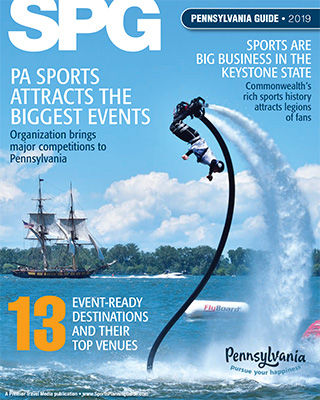 Pennsylvania possesses a rich professional sports history in which its eight major league teams have combined to win a total of 27 championships.

That success has created generations of sports fans who support their teams with a fervor rarely seen in this country. An example of this can be found on numerous polls in which cities are ranked for their sports fandom. One such study, conducted by WalletHub in November of 2017, tabbed Pittsburgh as the fourth best sports city in the country and Philadelphia the sixth. No other state had two cities that ranked in the Top 10.

Not surprisingly, sports are big business in Pennsylvania. According to a recent study conducted by Pennsylvania-based Tourism Economics, sporting events held in the state drew 5.5 million visits from out-of-town travelers in 2015. Those travelers generated more than $766 million in estimated economic impact in the state and supports more than 8,100 jobs. Events hosted or supported by PA Sports, a team of leading sports tourism organizations throughout the state, generated a total statewide estimated economic impact of $380 million in 2016, accounting for approximately 49.6 percent of the $766.4 million impact attributable to all statewide sports events. Sports events backed by PA Sports attracted a combined 4.3 million spectators and participants in 2016 with college events attracting nearly 1.7 million spectators and participants and professional events drawing nearly 1.3 million.

“Sporting events and competitions make a significant impact on the Pennsylvania economy, and are a major component of Pennsylvania’s tourism industry,” said R. Ron Sertz, chairman of PA Sports and executive consultant for the Erie Sports Commission in Erie, Pa. “While there are some areas of tourism and travel that are impacted by the economy, sports tourism has shown itself to be fairly recession-proof since families still travel for their children’s participation in competitions and adults still enjoy their personal involvement with sporting events either as a patron or a participant.”

Pennsylvania has proven to be a desirable sports destination thanks in large part to its litany of enticing destinations featuring major professional sports teams and flourishing collegiate sports programs. Philadelphia, the state’s biggest city, is emblematic of Pennsylvania’s sports tourism success. According to a report by Visit Philadelphia, the city pulled in record numbers for total hotel occupancy in 2017 (78.2 percent) and also enjoyed record leisure room nights (1.1 million) and record Saturday night occupancy (90 percent). Its hotel occupancy numbers in 2017 represented a 334 percent increase from 1997.

There are many reasons the City of Brotherly Love had such a successful tourism year, but sports, and the National Football League, in particular, played a major role. In 2017, Philadelphia hosted the NFL draft for the first time since 1961 and it resulted in a $95 million economic impact for the city. A report published by Visit Philadelphia in partnership with Temple University’s Sport Industry Research Center, found that 250,000 people visited Philadelphia for the Draft and the three days of events that coincided with it, resulting in 18,991 hotel room nights being booked. The Draft attracted attendees from 42 different states, with 92 percent of those saying the Draft was their sole purpose for visiting.

The Eagles’ march to the Super Bowl also helped the city’s bottom line, as the team’s average regular season home attendance in 2017 was 69,596, the highest of any year this past decade. The Eagles’ fruitful eight-game regular season, along with the team’s two postseason home games filled restaurants, bars and hotel rooms considerably more than in years past when the team was less successful on the field.

The National Hockey League’s Winter Classic held at Citizens Bank Park in Philadelphia is one of many major events the state has successfully hosted.

The Keystone State Games, which is Pennsylvania’s largest annually held multi-sport competition featuring amateur athletes, has attracted more than 500,000 participants of various age groups since its inception in 1981. The 2018 games, which took place in July, reportedly brought in around 7,000 people to Luzerne County in Pa., including 3,500 athletes and their families along with hundreds of coaches, officials and volunteers. The previous year’s games, which were held in York County, reportedly posted a $10 million estimated economic impact.

Pittsburgh also hosted a hugely profitable event in 2017, the Pittsburgh Vintage Grand Prix. The race, which is the nation’s largest vintage race and the only one run on city streets, drew more than 100,000 spectators over the two-day race weekend, brought in almost 24,000 hotel room nights and had an economic impact of $12.8 million. The race not only greatly boosted the city’s economy, it has also donated more than $4.7 million to two local charities, the Autism Society of Pittsburgh and the Allegheny Valley School. The 2017 race alone donated $405,500 to those causes.

Other popular amateur events across the state include Lake Erie Cyclefest in Erie County, in which hundreds of cyclists compete over a four-day span; the Lehigh Wheelmen Donut Derby in Breinigsville, a 36- mile bicycle race where doughnuts are consumed on the ride; the Thunder in the Valley annual motorcycle rally in Johnstown, which draws motorcyclists from across the country; and the Valley Forge 5-Mile Run in Valley Forge National Historic Park, where runners in numerous age groups dash across the challenging hilly course.

The Hershey/Harrisburg region is another example of the state’s flourishing youth sports scene. In 2017, Hershey/Harrisburg hosted the U.S. Junior Nationals Hershey Showcase, one of the longest-running organizations in girls basketball nationwide. The event accommodates groups from U9 to U17 and in 2017 hosted teams from 15 states and Canada. More than 4,000 spectators attended in 2017, resulting in more than 4,500 hotel rooms being utilized and recording a $2.7 million economic impact.

“Sporting events represent an integral part of the Pennsylvania economy,” said Sertz. “The market is diverse, including youth and adult amateur, college and professional events that attract out-of-town visitors to destinations across the Commonwealth. These visitors generate room nights and spending in local economies that produce substantial tax revenues and employment impacts. Thanks to the sales and marketing efforts of PA Sports, our team reports increased annual sporting events, which means a positive economic impact for Pennsylvania.”

An impact that figures to continue growing as the years advance