Biggest Rodeos in the US and Canada 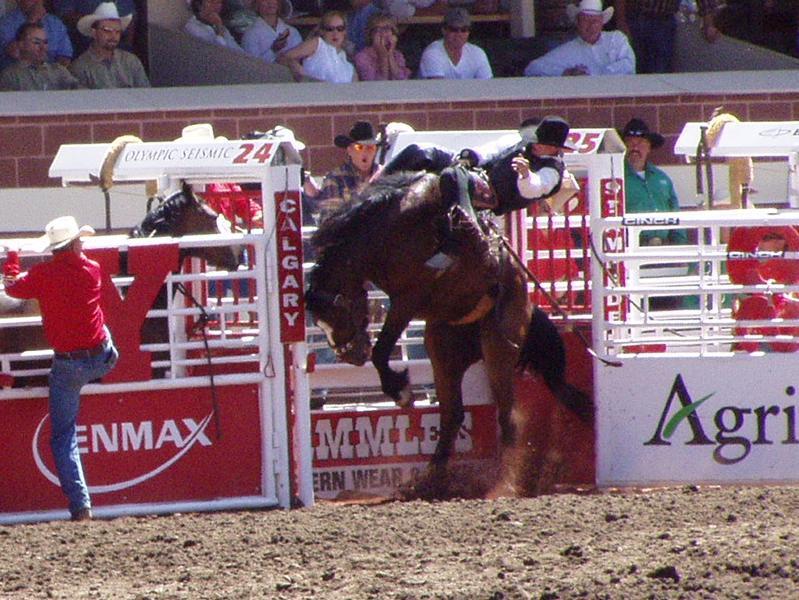 From goofy rodeo clowns to the fairs and celebrations that follow, rodeos provide a festive wild west atmosphere to go along with fast-paced, man-versus-beast thrills. The following events are among the biggest rodeos in the US and Canada for both avid fans of the sport and curious first-time attendees.

Started by Abraham Henson Meadows and John Collins Chilson in 1184, and now organized by the Payson Pro Rodeo in Arizona, it has been running for over 140 years, making it the oldest continuous rodeo in the world.

The rodeo takes place on August 18, 19 and 20, and this traditional rodeo show allows visitors to sit back and enjoy all the thrills the cowboys and cowgirls will bring you.

Canada’s largest rodeo runs in mid-July and turned 100 years old in 2012. A 10-day Western festival surrounds the tournament-style rodeo, which includes a corral show and chuck wagon races. The massive event has earned Calgary the nicknames “Stampede City” and “Cowtown.”

Much more intimate than some larger rodeos, Reno still packs in a week’s worth of action and excitement every June. A five-day cattle drive beginning in the Nevada wilderness and ending in Reno kicks off the 90-year-old rodeo. Reno is one of only 10 stops that the PRCA Xtreme Bulls tour makes each year.

Also known as the Southwestern Exposition Livestock Show and Rodeo, this 23-day event takes place from late January to mid-February and features the world’s longest all-Western parade. The parade includes over 2,000 horses, 35 bands and more than 100 horse-drawn carriages. An agricultural exhibition contains over 1,000 exhibits and hosts stock dog trials.

This indoor event takes place in late January attracts more than 1,000 cowboys to compete each year. The rodeo features a Mexican Rodeo Extravaganza that includes exhibition bull fighters. The nearby stock show is the largest beef-breeders show in the United States.

Only 15 cowboys and cowgirls qualify to compete in rodeo’s world championships in early December. Ten rounds of competition occur over 10 days of strictly action. There is no livestock show or festival to distract from what is rodeo’s Super Bowl.

This 20-day event runs from late February into mid-March and attracts over 1.5 million people each year. The world’s largest indoor rodeo features a calf scramble, chuck wagon races and mutton busting, an event in which children ride and race sheep.

This ongoing rodeo series runs from the start of June through the end of August every Friday and Saturday night. While struggling to find a place in its early days, Mesquite has established itself as one of the premier permanent rodeos in the country. The top 10 performers in each event from the season are invited back to compete for the Mesquite Series Championships at the end of August.

Strong Native American participation is one of the many draws to the annual roundup, which takes place in mid-September. An Indian Village and Happy Canyon Indiana Pageant complement the rodeo, parades and concerts. The rodeo includes events such as barrel racing and wild cow milking.