The following article appeared in the North Carolina State Sports Guide. Download the full guide below. 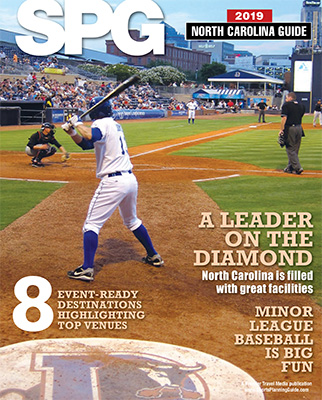 North Carolina has plenty of options for families and teams to enjoy off the field. For those visiting between early spring and late summer, catching a ballgame featuring one of the state’s 11 minor league baseball teams should be high on the list. There’s likely a stadium near your competition event.

The Asheville Tourists are a Class A affiliate of the Colorado Rockies playing in historic McCormick Field. Built in 1924, it was a popular stop for major league teams heading north after spring training. The New York Yankees, with Babe Ruth and Lou Gehrig, and in 1948, the Brooklyn Dodgers with Jackie Robinson, played at McCormick Stadium. Renovated in 1991, the facility made numerous changes to make it a fan-friendly venue, but the field remained the same. Friday Fireworks, Dollar Dog Night and Kids Eat Free are regular promotions.

Having played their first two seasons on the campus of Campbell University’s Jim Perry Stadium, the class A Advanced affiliate of the Houston Astros, the Buies Creek Astros will be moving to a new venue in nearby, downtown Fayetteville for the 2019 season. The new $37.8 million stadium will be ready for opening day and a team name is in the works. More than 1,400 entries submitted team names with the final choice narrowed down to five.

A Rookie affiliate of the Kansas City Royals, the Burlington Royals have an interesting and historic stadium story to tell. Burlington Athletic Stadium was originally built in Danville, VA. In 1959, the ballpark was purchased for $5,000 and reconstructed in Burlington and ready for the 1960 schedule. The Dollar Monday Madness promotion includes general admission, hot dogs, soda, peanuts, candy and chips, all for a buck each.

Could there possibly be a cooler name in baseball than the Carolina Mudcats, or a mascot named Muddy the Mudcat? You’ll need to make up your own mind by visiting Five County Stadium in Zebulon, NC just 25 miles from downtown Raleigh. The Class A Advanced affiliate of the Milwaukee Brewers has been playing baseball at Five County Stadium since 1991 with no shortage of major league talents. Miguel Cabrera, the 2012 Triple Crown Award winner and two-time American League MVP and Dontrelle Willis led the Mudcats to a record season in 2003.

When visiting North Carolina, baseball fans have the option to enjoy a game played by any of the state’s 11 minor league baseball teams.

Uptown Charlotte is home to BB&T Ballpark, the most visited venue in Minor League Baseball and the Triple A affiliate of the Chicago White Sox, the Charlotte Knights. From the opening in 2014 through the 2017 season, the Knights have 110 sell-outs at BB&T Ballpark. The Knights play in the competitive International League South. Postgame fireworks, regular bobblehead giveaways and A Fan Could Win $50,000 are popular promotions.

The Down East Wood Ducks, a Class A affiliate of the Texas Rangers, brought baseball back to Kinston in 2017 after a five-year drought. The Wood Ducks compete in the Southern Division of the Carolina League. Grainger Stadium, home field to the Wood Ducks, has seen plenty of action going back to its Kinston Indians days. Today, fans are enjoying quality baseball in a family friendly venue. The always-popular Fireworks Friday and Dollar Hot Dog Night are regular promotions.

When visiting the Triple A affiliate of the Tampa Bay Rays, the Durham Bulls, you can expect to see a welcome video possibly featuring scenes from the 1988 hit movie Bull Durham. Much of the filming was done at the historic ballpark where the Bulls had played since the 1920s. When the current Durham Bulls Athletic Park opened in 1995, it followed the movie’s lead with the “Hit Bull Win Steak” outfield sign. Fireworks Friday and Saturdays and $1 concession nights are big hits.

Mark the Hickory Crawdads as another cool North Carolina Minor League Baseball name. Entertaining mascots Conrad the Crawdad and Candy the Crawdad add plenty of fun to an evening with the Class A affiliate of the Texas Rangers. Bring your appetite if you dare to try one of baseball’s more unusual promotions, the “CLAWlossal Challenge.” For $25, you’ll have six outs to eat a foot-long chili & cheese dog, pub chips, an eight-ounce hamburger, a barbecue sandwich, a corn dog, five onion rings, two jalapeno peppers and two pickle strips. Winners get their money back and a T-shirt.

Meet Miss Babe Ruth, Master Yogi Berra and Miss Lou Lou Gehrig. They’re part of the game day crew of the Greensboro Grasshoppers, the Class A affiliate of the Miami Marlins. The three black Labradors take the stadium experience to a new level. They’ll take balls to the umpires, retrieve bats and participate during the in-game skits. The fun and action takes place in downtown Greensboro’s NewBridge Bank Park, which opened to begin the 2005 season. Money Off Mondays and Fireworks on Fridays and Saturdays are regular events.

In the heart of North Carolina motorsports, it just makes sense the Kannapolis Intimidators name pays tribute to NASCAR legend Dale Earnhardt, Sr. Intimidator Stadium has many motorsports themed spaces. A NASCAR standings board is next to the standings in the South Atlantic League board. The concessions for the Class A Affiliate of the Chicago White Sox are equally themed with Dale’s Mater Sandwich a favorite. Chicken Fried Fridays, Saturday Fireworks and assorted bobbleheads add to the fun.

The Winston-SalemDash, a ClassAAdvanced affiliate of the Chicago White Sox have played ball in the city’s downtown BB&T Ballpark since the 2010 season. In addition to great Carolina League baseball, the stadium concessions offer the one-of-a-kind, cheesy pig dog. A hot dog is topped with macaroni and cheese and barbecue. Dash mascot Bolt makes the rounds during the games entertaining the kids. Friday Fireworks, Family Sunday and Free Food Tuesday are just a few of the season’s promotions.

There’s hardly a doubt that an afternoon, or evening at any North Carolina Minor League stadium will be packed with fun. The teams welcome groups beginning with as few as 20 paid with a variety of seating options and package experiences. When your team is away from the field, check out the stars of tomorrow.