A State Sports Commission Made for the Spotlight 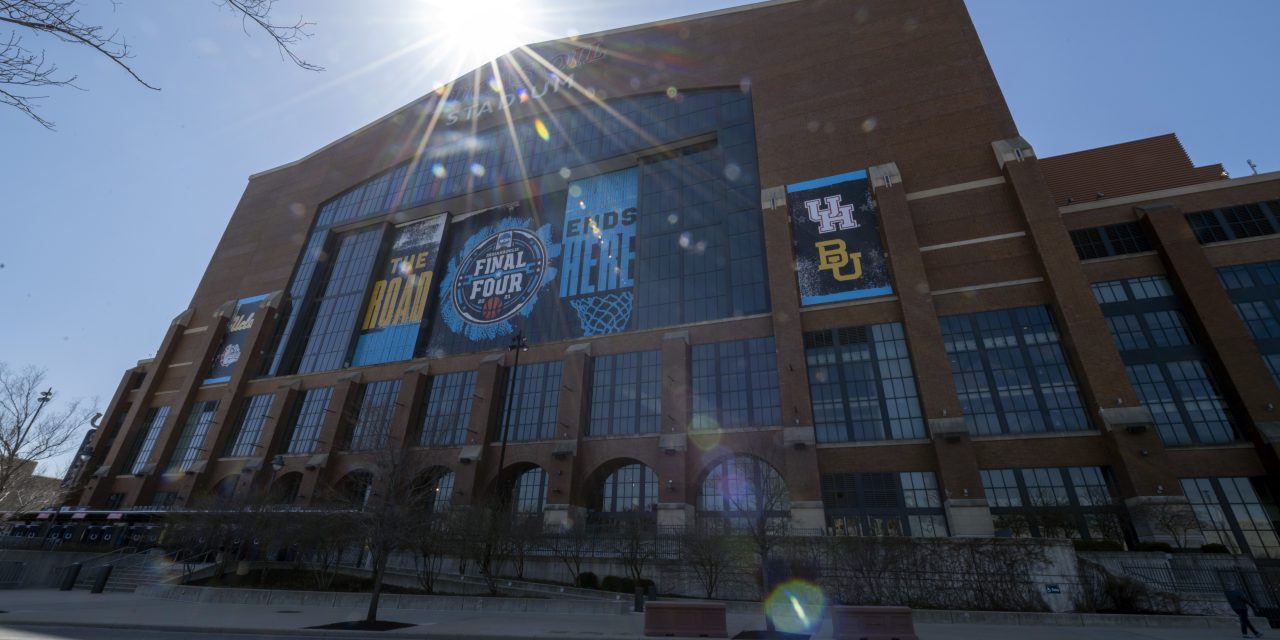 When the global sports spotlight illuminated Indiana again from March 18-April 5, 2021, it became a made-for-the-moment experience, albeit decades in the making.

Due to logistical concerns related to the lingering pandemic, the National Collegiate Athletic Association (NCAA) made the decision to run the entire 68-team 2021 NCAA Division I Men’s Basketball Tournament during that 18-day stretch at six venues in three destinations throughout central Indiana. Backed by a storied sports lineage that includes successfully hosting international events, recruiting national governing bodies and executing economic development projects aplenty, the city of Indianapolis, the state and the community would deliver again in making Indiana better through sports.

“The reality is, even as big as we are as a sports commission and as many volunteers as we’re able to pull together, our success is entirely dependent on our ability to rally community members together around a common mission,” says Ryan Vaughn, president of the Indiana Sports Corp. “That was never more apparent than during (2021) March Madness.”

Like countless others, the entire staff at Indiana Sports Corp worked every day from New Year’s through early April 2021, a people power and work ethic that Vaughn cites as a fortunate advantage for the organization as it continually carves out its niche in sports tourism. Founded as the nation’s first sports commission in 1979, Indiana Sports Corp (501(c)(3)) has always existed to advance the Indianapolis MSA through sports. Yet more recently, it also transitioned to a broader statewide role when it assumed leadership responsibilities of Team Indiana (formerly Sports Indiana) in 2020.

With its strong organizational structure and staffing capacity, the proposal to merge with Team Indiana made quick sense because of Indiana Sports Corp’s vast operational resources for the rest of the Team at no cost. Furthermore, Indiana Sports Corp dedicates one full-time employee to run the Team Indiana effort on behalf of the 29 Indiana commissions and convention and visitors bureaus represented, and Indiana may have positioned itself at an advantage as a result. More state sports associations have formed over the last 10 years as sports tourism has grown more competitive, though the majority of those entities lack full-time personnel.

Given the growth of state sports associations in recent years and this intersection of dedicated staff- and volunteer-led state groups, Sports Events & Tourism Association (Sports ETA) has ramped up relevant research to better understand these groups that resulted in the release of the State Association Study, which debuted in 2019 before being updated in 2021. Through qualitative interviews with all 29 state sports commissions and associations, Sports ETA has derived what is collectively working and where opportunities lie. Common themes for state association success center on how well destinations collaborate, enhanced brand awareness and bolstered event portfolios. Some big challenges, though, include funding levels and inconsistency, lack of staff and balancing the needs of every market size.

Yet Indiana Sports Corp remains at the forefront of sports events and tourism at the city and state levels. In its early years, the organization focused on combatting suburban flight to revitalize the downtown Indianapolis corridor through sports. While some of that sentiment remains, present day context has shifted the narrative to consider a broader infrastructure that’s amenable to people who wish to work, play, live in and visit the state.

“What’s changed a little bit is there is as much focus now on talent attraction as there was in capital investment. That’s the second part of our mission,” says Vaughn. “How do you use these events from a media standpoint to leverage your brand as a city as a welcoming, attractive and vibrant place? Our key focus is to be an economic driver, be a brand builder and then one of our core tenants goes back to community engagement. We want the city to work, volunteer and participate in these events for multiple reasons. One, we want them to feel good about what their city is doing. Two is to help execute the event, and three is to really take it to the next level from a hospitality standpoint.” 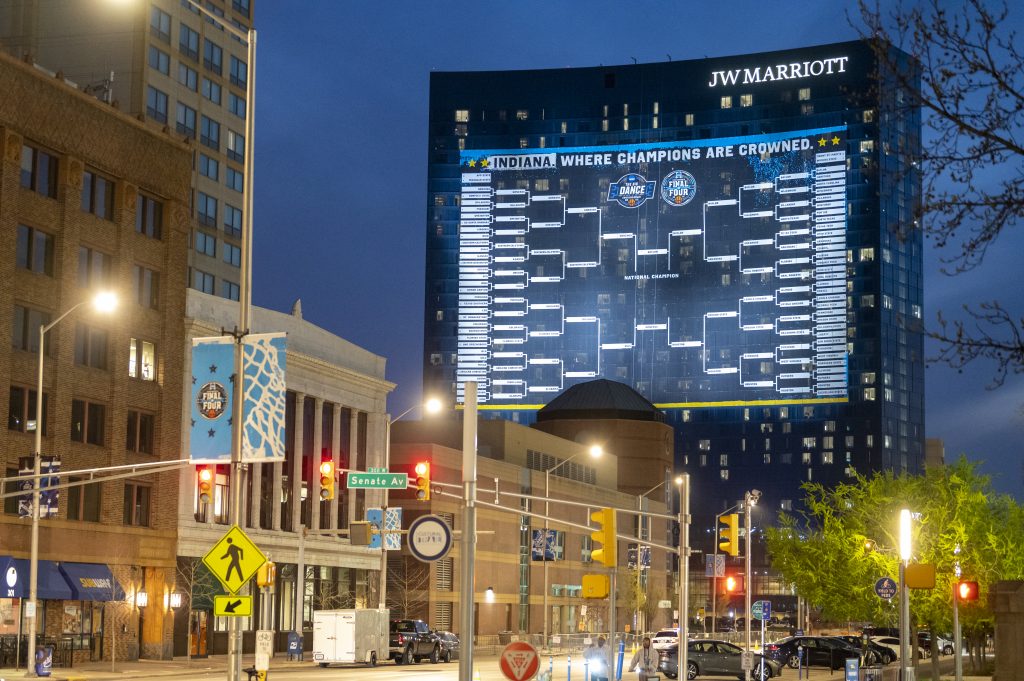 Due to logistical concerns related to the pandemic, the NCAA made the decision to run the entire 68-team 2021 NCAA Division I Men’s Basketball Tournament during that 18-day stretch at six venues in three destinations throughout central Indiana. Photos courtesy of the Indiana Sports Corp

Sports ETA’s 2019 State Association Study findings indicated that 60 percent of state associations are purely volunteer-led. As an exception to this staffing norm, Indiana Sports Corp’s staff sits at 24 full-time employees and Vaughn projects that number will grow to 27 in 2022 in light of a busy events calendar. As events stack up, that also means additional client needs in marketing and public relations, presenting staffing needs that Indiana Sports Corp can address because of the value it’s built over the years.

“We were noticing rights holders really wanted more from us related to marketing and public relations, so we hired a marketing lead, we have a PR professional, we hired a graphic designer and we have a digital marketing manager that does all of our email campaigns,” says Vaughn, who has led the organization since 2014. “We really have a growing investment on the marketing side. One mindset is we have to provide that service for the events we host, but it’s also very valuable to us when it comes to sharing our mission, sharing our impact, and tracking volunteers. We need to continue to grow that.”

In addition to full-time employees, Indiana Sports Corp has its fair share of volunteer support via thousands of engaged community members who are interested being a part of the next big event. Moreover, the organization enlists 60-plus board members that includes an executive committee and eight subcommittees, which oversees programs like Team Indiana. That level of variety gives each individual enough autonomy to choose where he or she fits in best.

“What we’ve done is try to find the best of both worlds. We have a very broad general board that is interested in our mission and has been supportive financially, but mostly we are reporting out to them about what’s coming up, how they can be helpful, how their employees can engage and the type of impact we’ve had,” Vaughn says. “It’s sharing your mission and impact, it’s about community building and understanding the value proposition of the Sports Corp. And then we’re managed, if you will, by a much smaller executive committee of about 13.”

While Vaughn acknowledges a natural urban-rural tension between large and small markets, the Indiana Sports Corp’s shared approach to staff and resources balances the needs of both and optimizes the state process. It allows for pooled resources ranging from graphic design support to use of a custom economic impact calculator. There is also a mutual understanding of target markets, allowing the Indiana Sports Corp base to focus primarily on large college, professional and international events suited for stadiums while the Team Indiana committee sets its sights on youth sports tournaments.

This attention to information sharing pays dividends for everyone when it comes time to seek local and state government support, where legislators may be more inclined to respond favorably to internal collaboration rather than competition. And per the Sports ETA study, working well with one another happens to be the leading indicator (28%) of how state associations define success.

“In essence, we’ve decided to eat the cost of running the (Team Indiana) program to continue to be there and add value. That turned out to be incredibly valuable during COVID because of the information sharing about how to open, best practices and the coordinated outreach efforts to state and local health departments about what was permitted and what wasn’t,” Vaughn says. “They were really able to take best practices from some of our professional leagues that we were talking to—the NBA, the NFL—and say we know how to do this and let’s open. We don’t have to be scared, we can do this safely.”

POWER IN PARTNERSHIPS AND PEOPLE

In the midst of its fifth decade, Indiana Sports Corp’s March Madness-esque moments in Indianapolis or youth tournaments like the 2021 Great Lakes State Basketball Championships in Columbus seem to occur on the regular. Yet the calling card of Indiana Sports Corp extends beyond event day and ties back to its roots and people.

“The events themselves are huge—we want to attract major events to have a tremendous economic impact, but our mission is broader than just the events,” Vaughn says. “It’s also about how sports support the economy in downtown Indianapolis. Our approach is there are so many companies that interact with sports that aren’t rights holders or events themselves, so what are we doing to try to grow that ecosystem?”

One of Indiana Sports Corp’s more recent answers to that question is through its Techstars Sports Accelerator, which relocates 10 start-ups to Indianapolis for three months annually to help identify sports tech trends, drive meaningful engagement within the industry, and amplify sports innovation and entrepreneurship. Launched in 2019, the program, which brings upstarts ranging from esports (Beastcoast) to sports tourism (Playeasy), has been so well received that some selectees have kept office space—Beastcoast included—while others have signed manufacturing contracts to ensure products are made in the capitol of Indiana. As an added bonus, the program also offers another source of incremental funding.

“The thought is if you can nurture start-ups and keep them, you’ve grown that sports ecosystem,” Vaughn says. “Regardless, from a revenue standpoint we all pitched in money to fund the accelerator and, then as a part of that, we got a piece of equity. So we own tiny pieces of 30 companies and it’s another way to diversify our funding.”

As the Sports ETA study also suggests, diversification of revenues is driving sports tourism at all levels. In the 2019 release, 64 percent of respondents reported being funded by a single source or, worse, not funded at all. Per the 2021 update, 73 percent were funded by some form of state and member/partner fees, demonstrating a significant shift toward increased efforts at business and partnership development. While state associations still tend to define key stakeholders as destinations, convention and visitor bureaus and state tourism offices, there are ample opportunities to explore partnerships with facilities, national governing bodies and event owners, sports tech start-ups, and even global sports brands.

But as Indiana Sports Corp well knows, it may take a village and then some.

“It’s going to be incumbent upon sports commissions to have a professional staff out there every day, one, chasing the business and, two, turning around and executing it—if you don’t, I don’t know how you can compete at a high level,” says Vaughn, whose staff is back in all-hands-on-deck mode as Indianapolis readies to host the 2022 College Football Playoff National Championship Game for the first time January 10 at Lucas Oil Stadium. “That doesn’t mean that it’s going to head that way because every city and state may not have an appetite for investing in sports. Some of it’s a little bit cultural, but those that do and want to compete are going to have to have that.”