Aiming Toward a Sustainable Future for Stadiums 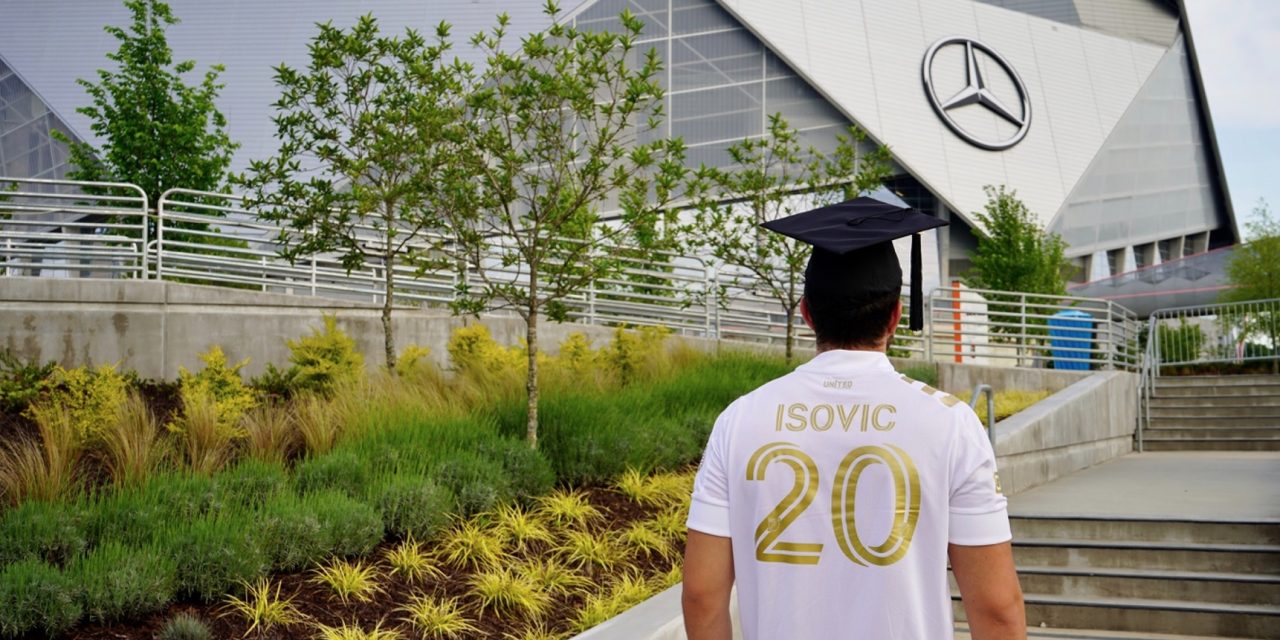 Traditionally, sports stadiums and facilities have left negative impacts on the environment. From energy consumption, waste management and air pollution, there are many factors that, if not consciously managed by a facility, can increase its carbon footprint exponentially. A study conducted by researchers at Cardiff University found the average attendee of a major sporting event – the Football Association Challenge Cup Final – produced a carbon footprint that was seven times higher than the average for everyday activity. However, there has been a considerable movement in the sports industry to re-imagine the function of stadiums and facilities in a greener way.

The challenges to becoming an eco-friendly stadium

Most facilities have to power lights in their buildings and over their fields for hours on end, using immense amounts of energy. With most of America’s energy mix coming from petroleum and natural gas, stadiums that do not source from renewable energy can be a huge stressor on the environment. The average energy use per stadium varies greatly, and depends on the seasonality of the sport, how many teams play in a stadium, whether the stadium is indoors or outdoors, and numerous other factors. AT&T Stadium, the largest stadium in the NFL and home to the Dallas Cowboys, can use up to 10 megawatts of electricity on a game day, enough energy to power approximately 3,600 homes.

However, the energy used during a game is not the only concern. A study from the University of Arkansas’ Office of Sustainability showed that in their Razorback Stadium, 63 percent of the total energy use came from the months outside of the August to November football season that year. Considering these unforeseen costs of powering a facility year-round, inefficiency in energy use can spell disaster for a stadium, environmentally and financially.

Water waste is also an environmental issue for stadiums. From unsustainable landscaping to a lack of water recycling programs, the exhaustion of the local water supply can endanger the community and local farmers during periods of water shortage. Air quality is also a substantial issue when considering large game-day events that attract thousands of spectators. A study into sporting events at North Carolina State’s Carter-Finley Stadium had shown that hours before an event, the increased traffic, tailgating, and idling cars caused a significant decrease in air quality around the stadium for up to 12 hours after a game.

The sports industry may have the most to lose when thinking about local effects of climate change. Increasing intensity of storms, wildfires, droughts, and rising temperatures could make it difficult, or even impossible, for teams to continue to play in their facilities. This grim reality has driven this industry to spearhead the environmental movement in their community to safeguard the future of their facilities.

A big company aims for change

One company that is stewarding the eco-conscious movement is Delaware North, the property owner and manager of more than 50 professional sports stadiums. It has set some remarkable goals, like offering locally sourced food options and providing 100 percent of single-use packaging products from materials that are recyclable or compostable. This past May, Delaware North introduced a partnership with WinCup’s phade Eco-Stirrers. Made from PHA (polyhydroxyalkanoate), this product is a marine and soil biodegradable alternative to drink stirrers made from plastic. Delaware North featured this product in both the KPMG Women’s PGA Championship and the Men’s PGA Championship this year. Deb Friedel, director of sustainability for Delaware North, stated in a recent press release: “We look forward to continuing to introduce phade to our managed properties and upcoming events across the country to bring about a better, greener future.”

Newer sporting complexes have emphasized the importance of sustainability in the future of sports. Mercedes-Benz Stadium in Atlanta went above and beyond in reaching LEED Platinum Certification, the first stadium in the world to obtain such a high award for its energy-conscious design and practices. Opened in 2017, the stadium provides smart water usage and rainwater collection, solar panels to power its energy needs, eco-friendly transportation options to the stadium, and on-site gardens and greenspaces. 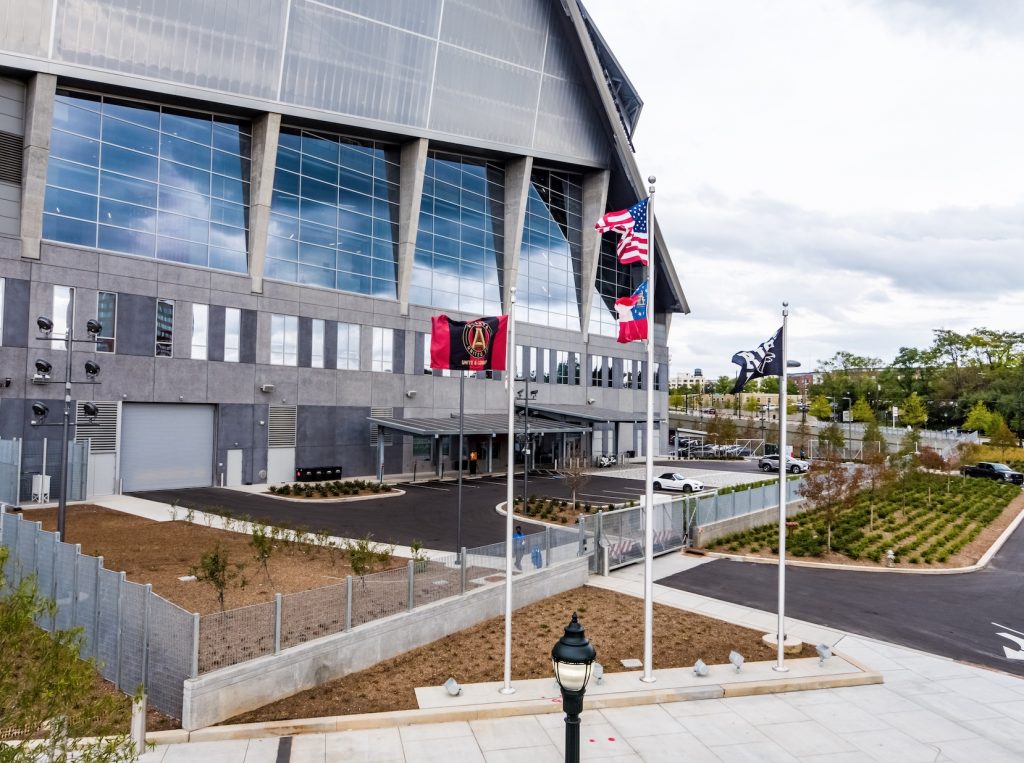 Climate Pledge Arena, currently under construction in Seattle, Washington, has taken sustainability a step further: it has pledged to be the first stadium in the world to produce no carbon emissions, use no single-use plastics, and produce no waste. The stadium’s construction went as far as to reuse some material from the former building on the property in order to reduce the environmental impact of construction. 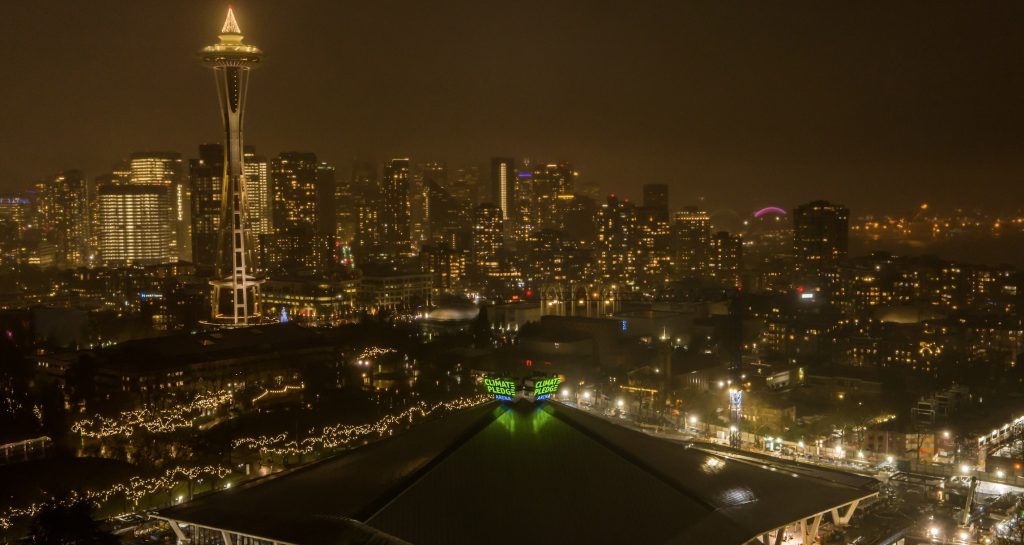 This year’s Olympic Games hosted in Tokyo, Japan, is on track to be the most environmentally-conscious Olympics yet. All electricity generated to power the event will come from renewable energy, mostly from solar panel farms across Japan’s countryside. Japan’s Olympic committee has also gotten creative in the ways they are reimagining recycling: officials asked Japanese citizens to donate metal in order to meet the goal of creating the Olympic medals from 100 percent recycled goods. For Japan’s Olympic team, they are partnering with the clothing brand Asics to create as many uniforms and ceremony outfits from recycled material as possible. For the biggest sporting event in the world to be so forward-thinking in its efforts to go green, this represents a shift to bring sustainability to the forefront of sporting values.

Smaller facilities can help the environment as well

However, not every facility or event can afford such a hefty re-investment into their infrastructure to reduce their carbon footprint. Despite this, there are many ways that mid-to small-sized sporting facilities across the nation are reducing their environmental impacts within their means. To save water, facilities can install low-flow toilets and faucets, or use collected rainwater for bathrooms and landscaping. To reduce energy usage, facilities can invest in new insulation, replace all lighting with LED lights, or install motion sensors for lighting. Many states also offer programs that incentivize businesses to install solar panels like rebates and discounts.

It is evident that sports facilities and their managers have a vital role in the environmental movement: 63 percent of Americans consider themselves sports fans, but not many sports fans would consider themselves avid environmentalists or conscious about their carbon footprint. These initiatives and actions set forth by the sporting industry, from facilities and events large and small, help to spread awareness about the importance of acting sustainably to a large and influential audience.

Many stadiums do this by directly offering sustainable options to fans, like Miami’s Hard Rock Stadium did for the 2020 Super Bowl when it gave reusable aluminum cups to those who attended. This is also done through education, as most stadiums have easy to understand signs explaining what can go in recycling, compost and trash bins. This information can also be relayed though PSAs announced through the loud speakers throughout the game. Finding ways to involve fans in this way creates a truly cooperative effort to reducing the compound environmental impacts of sporting events, one step at a time.