The following article appeared in the Alabama State Sports Guide. Download the full guide below. 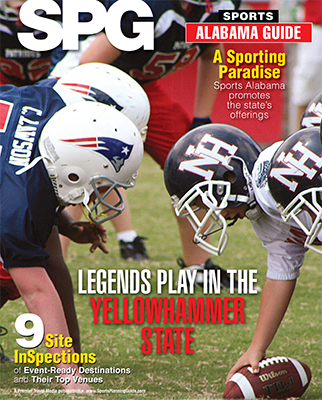 Any sporting conversation regarding Alabama would be incomplete without mentioning its football prowess. The state’s two major Division I colleges, the University of Alabama and Auburn University, have combined to win six of the last nine NCAA football championships, an unprecedented run for any state in college football history.

Both teams own an impressive legacy with a multitude of national titles over the years, and both typically fill their mammoth stadiums for every home game. Alabama plays in Bryant-Denny Stadium, which holds 101,821, while Auburn competes in Jordan-Hare Stadium, a venue that seats 87,451.

Alabama’s unrivaled history includes 17 national championships, a record for any school since 1900, and two of the greatest coaches in NCAA football history, Bear Bryant and Nick Saban, who have won six titles apiece. Auburn has an impressive lineage as well regarding the gridiron, as the Tigers have suited up such stalwarts as Bo Jackson, a legendary running back who won the Heisman Trophy in 1985, and Cam Newton, who captured the Heisman in 2010 while leading Auburn to the national championship.

Not surprisingly, football is big business for both schools, as Alabama reportedly brought in $108 million in revenue last season, while hotels in the Auburn/Opelika area on game days are typically around 83 percent full, a considerable improvement over their 60 percent number on an average weekend throughout the year. Games against SEC rivals and homecoming weekend swell those numbers even higher. Alabama is also home to smaller college football squads, including Alabama A&M in Huntsville, which has won or shared 13 league titles; Jacksonville State in Jacksonville, which captured an NCAA Division II National Championship in 1992; Samford in Homewood, which has suited up former notable coaches Bobby Bowden and Jimbo Fisher; and Troy University in Troy, which won an NAIA National Championship in 1968 and two NCAA Division II titles in 1984 and 87. While football is certainly king in Alabama, it isn’t the only game in town, as residents and tourists alike have a host of other sporting options to enjoy. Here are a few of them.

Talladega Superspeedway, located 50 miles east of Birmingham in the northeastern portion of the state, will celebrate its 50th anniversary in 2019. This speedway has earned a reputation as one of NASCAR’s most competitive tracks, as it is the longest NASCAR oval with a length of 2.66 miles and is also the steepest, with 33-degree banking. Talladega is the site of NASCAR’s fastest qualifying lap, the fastest 500-mile NASCAR race and some of the most volatile crashes in motorsports history. With a capacity of 78,000, Talladega attracts a slew of fans as it hosts NASCAR events, an Xfinity Series race and a Camping World Truck Series race. The fabled speedway is scheduled to undergo a $50 million renovation in 2019, in which it will see numerous improvements including the addition of a 140,000-square-foot Fan Zone Experience, a 35,000-square-foot open air club, a new victory lane and approximately 300 new RV spaces.

Located adjacent to the speedway is the International Motorsports Hall of Fame, a venue dedicated to enshrining those who have contributed the most to the sports of auto racing and motorized boat racing. Founded in 1990, the Hall of Fame has inducted many of racing’s finest drivers, including Dale Earnhardt Sr., A.J. Foyt and Richard Petty. Another race track that has an illustrious history is the Huntsville Speedway in Huntsville, a quarter-mile oval track that opened in 1959. It held one NASCAR Grand National Series event in 1962 (won by Richard Petty) and today, the track hosts weekly racing with a variety of stock car and modified classes.

Alabama sports an impressive history when it comes to baseball.

Alabama’s history includes an impressive list of baseball legends who played in the state, including Hank Aaron, Willie Mays and Satchel Paige. Its modern incarnation of the National Pastime is notable as well, as the state features minor league teams in Birmingham, Montgomery and Mobile.

The Birmingham Barons are a Double-A affiliate of the Chicago White Sox that is noted for having both Bo Jackson and Michael Jordan suit up for the team. The Barons have captured six Southern League championships (the most recent coming in 2013) and recorded the highest attendance in 2017, as the Barons drew 391,725 fans to Regions Field. The Montgomery Biscuits, a Double-A affiliate of the Tampa Bay Rays, have suited up the likes of Carl Crawford and Evan Longoria and have won five Southern League titles in its history, including back-to-back crowns in 2006 and 2007. The Mobile BayBears are the Double-A affiliate of the Los Angeles Angels of Anaheim and play in Hank Aaron Stadium, named after baseball’s former all-time home run king. The team has featured such stalwarts as Max Scherzer and Paul Goldschmidt and has earned four league championships, including back-to-back titles in 2011 and 2012.

Birmingham is also home to baseball’s oldest stadium in America, Rickwood Field, which was built in 1910, predating even Fenway Park and Wrigley Field. Rickwood Field is listed on the National Register of Historic Places, is immaculately preserved, considered a working museum, and still hosts the occasional Barons game.

These courses have been strategically dispersed across the state and feature 468 championship-caliber holes on 26 golf courses at 11 sites. It has been described as the largest golf course construction project ever attempted.

Alabama has a diverse terrain making it an exemplary biking location.

Alabama is replete with biking routes and diverse terrain, making it an exemplary biking state. Riders of all skill levels can enjoy many of the state’s offerings, including the largest state park in Alabama, Oak Mountain, which spreads across 9,940 acres just south of Birmingham. With more than 50 miles of hiking and biking trails set against a picturesque backdrop, Oak Mountain is a popular locale for riders. Other top-notch biking sites include Chewacla State Park, south of Auburn, which resides over 696 scenic acres and offers riders more than 30 trail miles, and Coldwater Mountain near Anniston, which has a total of 35 miles of trails, ranging from beginner to expert.