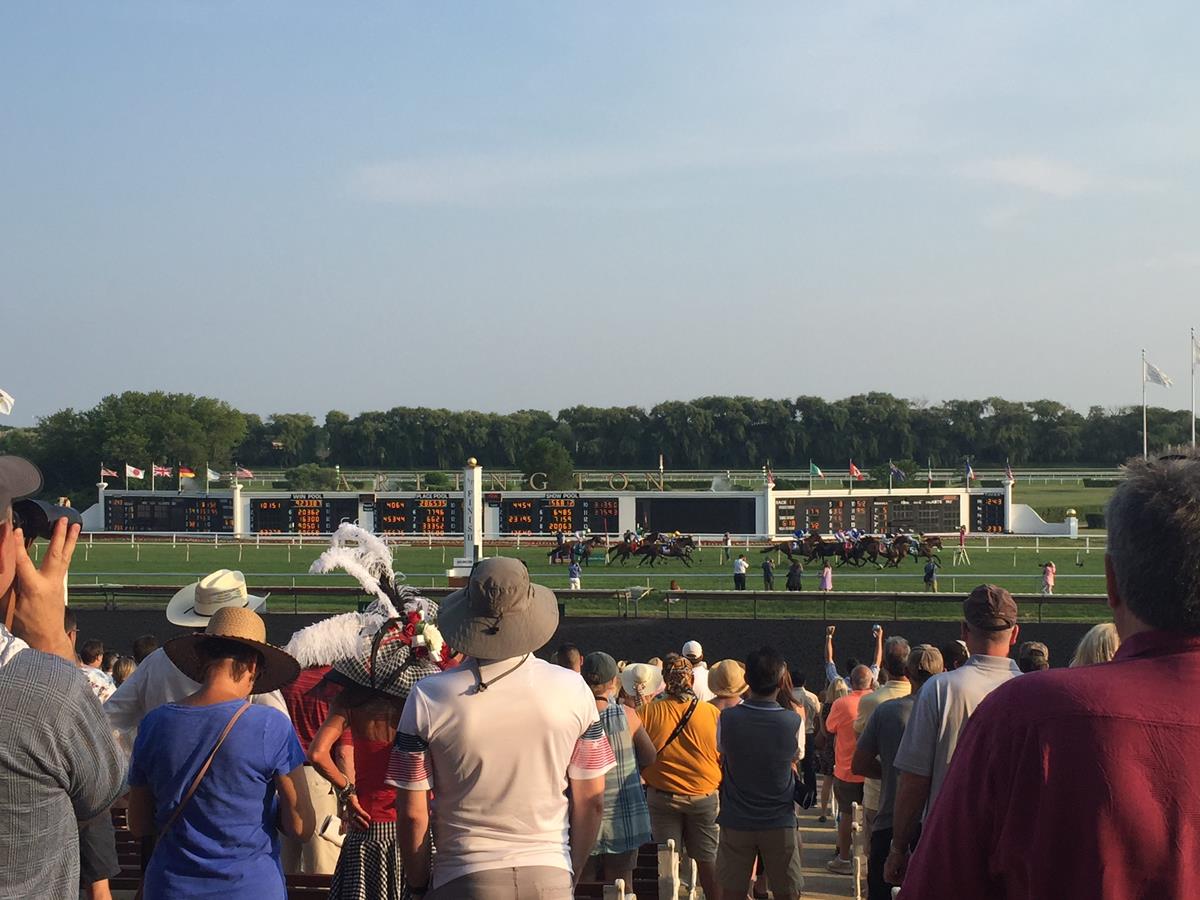 Illinois’ most prestigious racing day took place at Arlington Park on Saturday, August 11. Personally, I have been to the Arlington Million 24 times as part of my family’s tradition. As Jamaican-born racing fans, they have always loved partaking in the annual International Festival of Racing. The annual event welcomes competitors from all over the world to fight for a legendary spot in racing history. My parents’ faces especially light up when they see the Jamaican flag flying in the stands or encounter other Caribbean racing connections.

After 24 Millions, I can honestly affirm that the feeling never gets old. A certain air of pomp and circumstance floats over you just walking up to the over 2.1 million-square-foot complex, constructed with its pristine white-brick buildings and six-story grandstand. Each building is draped in vines and surrounded by tomato-red flowers. Commonly referred to as America’s most beautiful racetrack, Arlington Park, located in the Chicago suburb of Arlington Heights, does not disappoint. 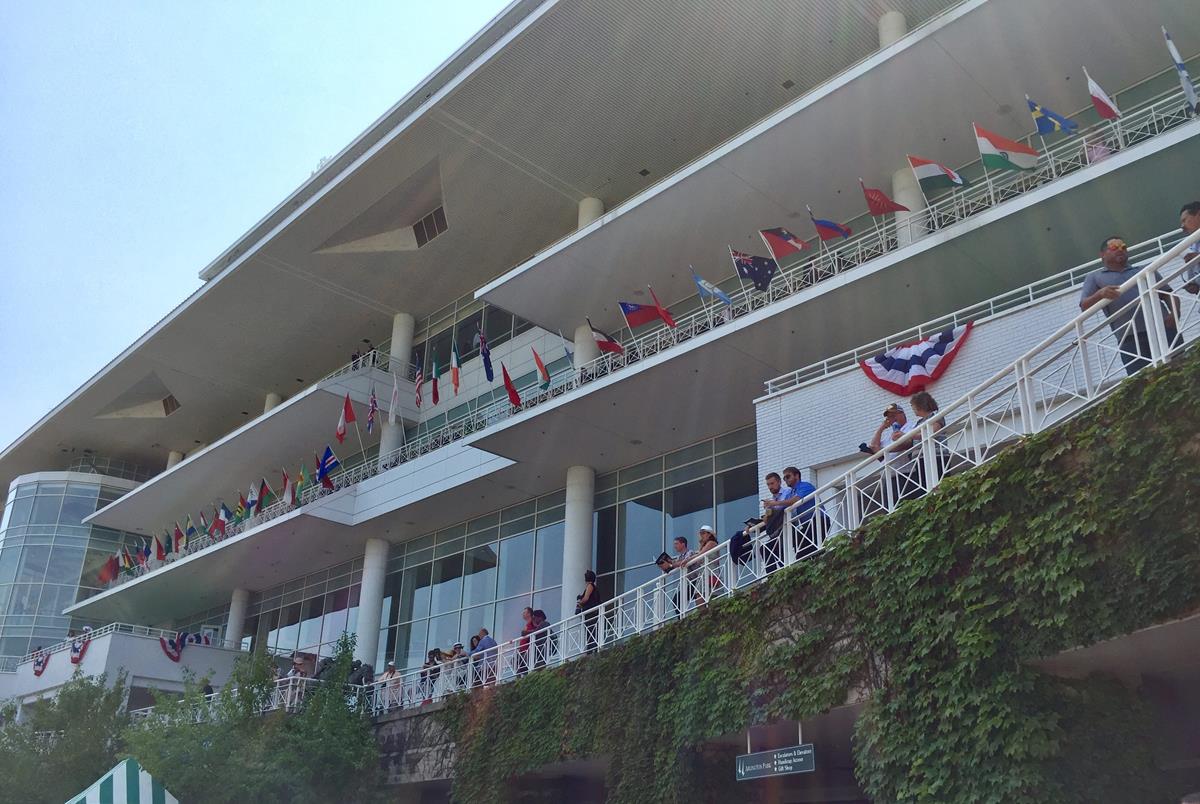 They also say that the price of beauty can be quite painful, and Arlington has certainly endured that pain over the course of its 91-year history. Not long after opening in 1927, the track overcame both the Great Depression and World War II. Many saw the racecourse as a source of enjoyment, as well as a stroke of luck during that time. Arlington brought even more happiness and good fortune when it opened the first million-dollar race the world had ever seen in 1981. A statue of long shot John Henry defeating The Bart by a nose stands resolutely on the second floor. 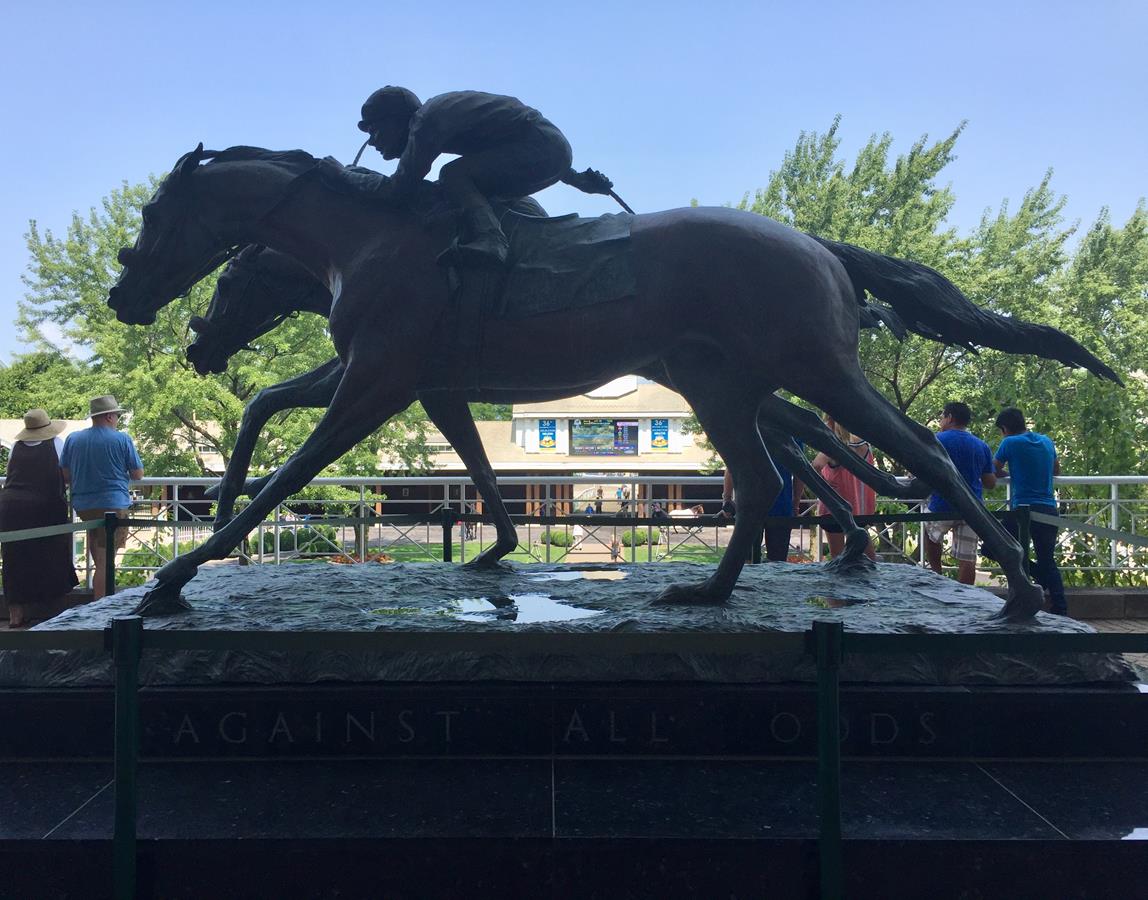 Just four years after hosting its first Million, Arlington fell victim to a fire that spread from the Horseman’s Lounge to the paddock and grandstand. What started out as a small blaze quickly demolished the entire facility, causing owner Richard Duchossois to heavily contemplate the racetrack’s future. But the track prevailed—and the “Miracle Million” ran only a month later. Future Millions are undoubtedly a testament to the racing teams’ determination.

Saturday’s Million Day comprised 12 races, many of which were graded stakes. The earlier races are mainly maiden claiming and stakes races with small purses. Though not as competitive as the larger stakes, these races are where you’ll get the first sightings of young horses that have the potential to be great. I spent this part of the day studying the racing form and scanning the crowd for well-built, ready-to-run fillies and colts. Any keen fan will pay attention to both horses and track conditions since competitors’ performances are highly impacted by weather and the textures of the synthetic- and turf-track surfaces. Luckily for everyone, the sky remained clear blue throughout the day.

While in the paddock, I caught up with a few connections, including apprentice jockey Skylar Spanabel. The Michigan native noted that she was “feeling great and excited” to be a part of the Million. Spanabel joins an impressive jockey colony, not to mention a wave of talented female riders.

Many of the earlier races presented possible future stars. Duchossois, a three-year-old colt named after the park’s owner, displayed a convincing victory in the third race. Three-year-old gelding Maxus took the sixth race after winning only eight percent of his races, while popular pick All Call closed out the seventh race. 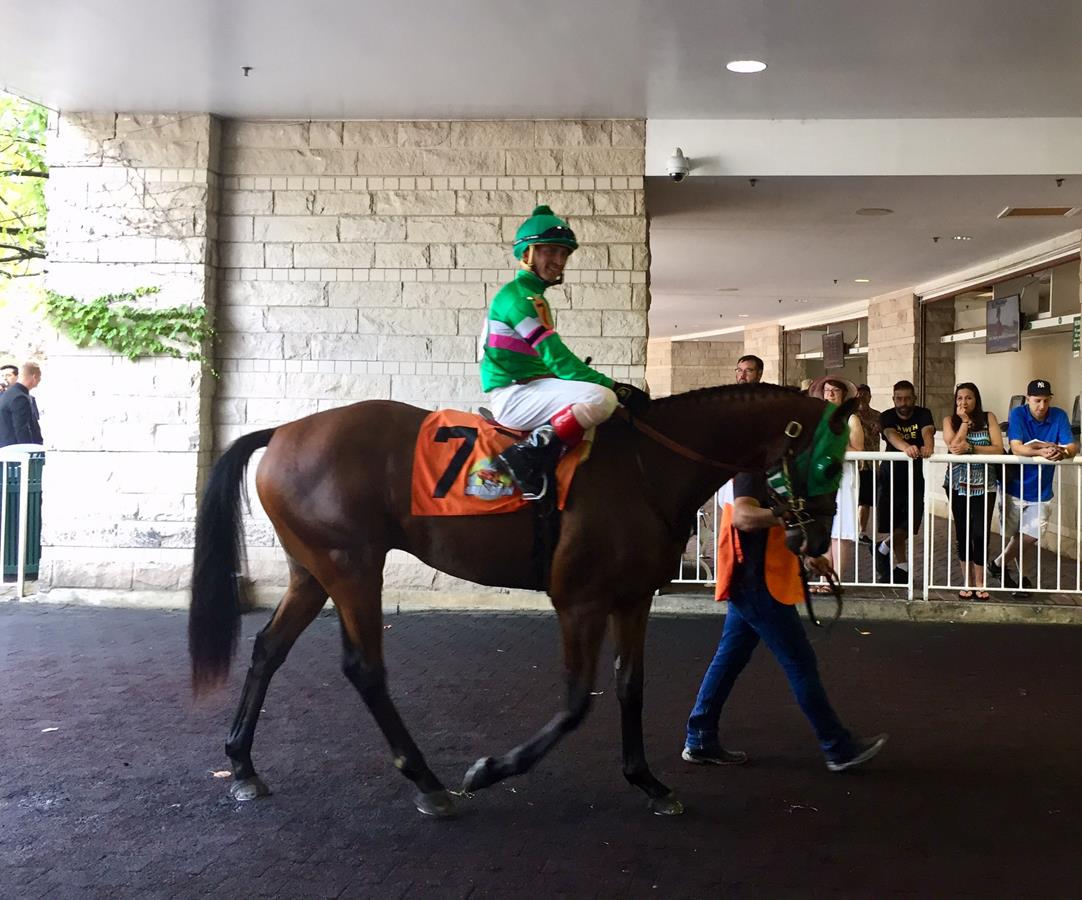 The Bruce D. Memorial Stakes, named in honor of Duchossois’ late brother, capped off the graded stakes races with a shocker, as Sir Anthony snatched first place at 35-1. To add to the excitement, jockey John Velasquez captured a surprising daily double on Carrick in the Secretariat and Sistercharlie in the Beverly D., named after Duchossois’ late wife.

The ultimate daily double, however, went to Saratoga’s top jock, Irad Ortiz, Jr. In the Million, Ortiz dominated the field aboard Robert Bruce, one of three horses entered in the stakes by owner Chad Brown. He finished the day with another victory aboard Secret Message in the Pucker Up Stakes. His brother, Jose Ortiz, took second on Pamina. 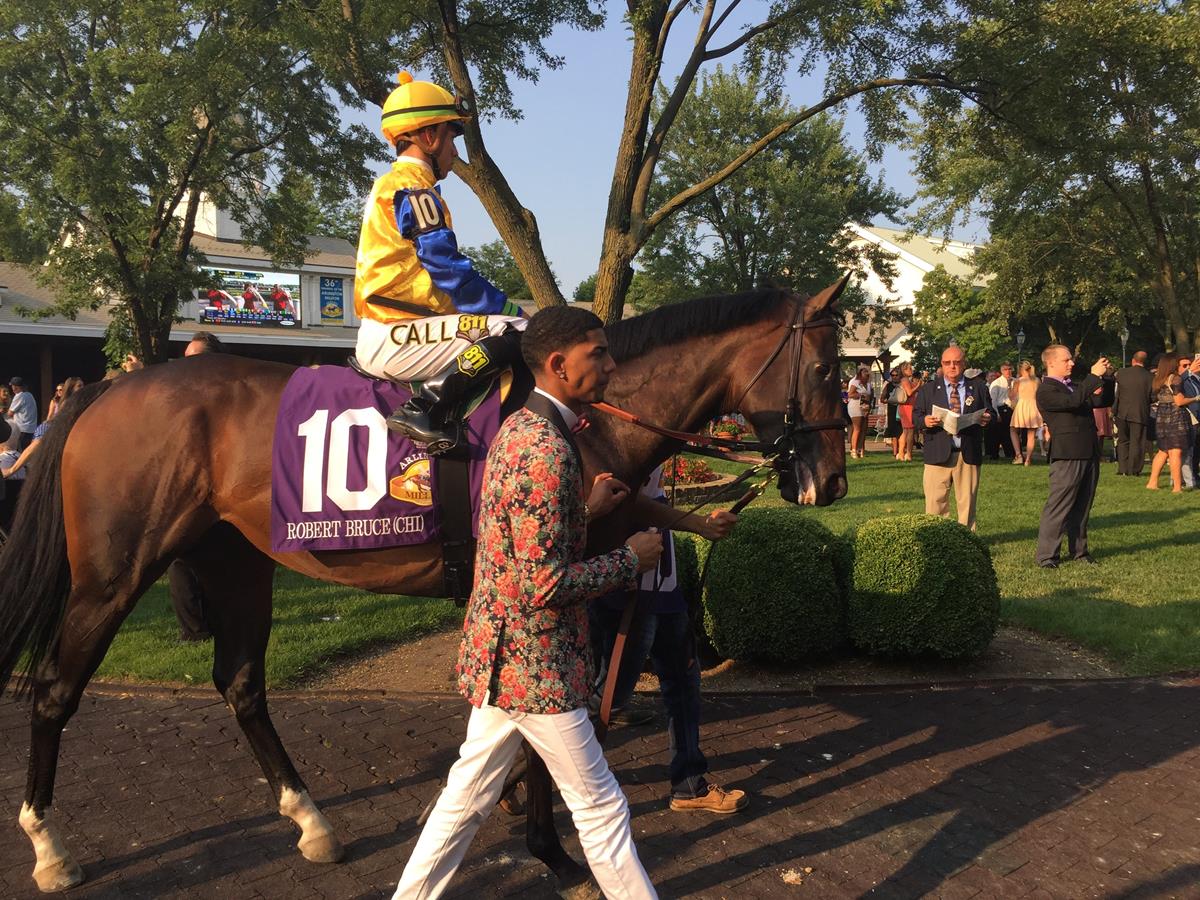 In addition to the races, Arlington has incorporated several other ways to have fun. There were multiple giveaways throughout the day, including a “Best Dressed Contest,” where women adorned in bright hues and big hats competed for a variety of prizes. Visitors also attended a country concert headed by singer Eric Paslay on the Miller Life Band Stage. Arlington hosted a number of raffles, one of which offered the chance to win fourth-row tickets to see Billy Joel at Chicago’s Wrigley Field on September 7.

Visitors definitely shouldn’t miss out on Arlington’s glorious food scene. Grab well-cooked fast food and treats from popular vendors, such as the second floor’s wide selection of food. Indulge in any of the seven food stations on the second floor. My family and I shared a round of chicken tenders and fries, a spicy chicken sandwich and a spicy black bean burger. We highly recommend all of our choices (and will be coming back for more). Arlington’s third and fourth floors boast more luxurious options in the Million Room Restaurant—think lemon aioli, sautéed spices and lump crab. Dine casually at the Miller Lite Finish Line, Terrace Café or Cowboy Grille. Take-home treats and gifts are available at the gift shop on the second floor.

With so many ways to enjoy yourself, you’ll find that a day at Arlington Park is a day well spent. It certainly was for my family and me. I should add that this year’s Million fell on my parents’ 34th wedding anniversary. What a perfect way to celebrate.