Baseball and Beer: An Illinois Tradition

The following article appeared in the Illinois State Sports Guide. Download the full guide below. 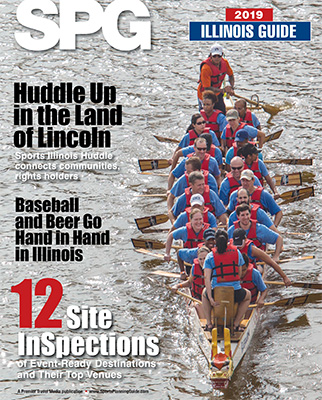 With an array of cultural offerings coupled with diverse residents scattered across its terrain, Illinois has been described as a quintessential American state.

And few things are more American than baseball and beer, two subjects in which Illinois excels.

The Land of Lincoln lays claim to 11 major and minor professional baseball teams and is home to an assemblage of talented batmakers, many of whom fortify those teams with baseball’s most essential tool. The state is also a haven for a multitude of breweries and distilleries, meaning fans of the National Pastime will rarely go parched.

With so many top-notch artisans plying their trade within state lines, the Illinois Office of Tourism established an initiative called Illinois Made to showcase its luminaries. Illinois Made features those who craft, design and invent and gives an intimate glimpse into the creation process of professionals across the state, from pizzerias and barbecue joints to those who create art and pottery. Sports fans, however, will be interested in the state’s Illinois is a haven for major and minor breweries and bat makers.

Illinois is a haven for major and minor breweries and bat makers. professional baseball teams, as well as home to a multitude of breweries and distilleries.

Regardless of whether your team wins or loses, Illinois has a slew of breweries and distilleries where you can joyously exalt a victory or drown your sorrows after an agonizing defeat.

Prior to prohibition banning alcohol sales in the United States between 1920 and 1933, Murphysboro, a small Southern Illinois town, was home to a thriving brewery. Big Muddy Brewing is doing its part to return Murphysboro to those halcyon days, as this microbrewery creates small batches of craft beer for enthusiasts to enjoy. Big Muddy also offers tours of the operation and encourages visitors to enjoy samples of its product.

An independent company who opened its first gastro brewpub in 2007 in Normal, Destihl Brewery combines centuries-old global brewing traditions and new American craft brewing techniques to produce a wide variety of beers. It enjoyed such success in a short amount of time that it opened a second location in 2011 in downtown Champaign. That same year, Destihl made a splash at the Great American Beer Fest in Denver and became a nationally recognized brewery that has since won a multitude of awards. Those seeking to witness the brewing process up close can take a guided tour with beer tastings or a comprehensive tour of brewery operations that is followed by a sampling of beers and culinary creations.

Stationed near the Abraham Lincoln Home National Heritage Site, Obed and Isaac’s Microbrewery & Eatery offers an eclectic menu and locally crafted beer. The story of Obed & Isaac’s began more than 150 years ago when Obed Lewis married Cordelia Iles and built their family home on the corner of Seventh and Jackson streets. In this charming neighborhood that stands today as a National Historic Site, their kids became friends with the children of another prominent Springfield couple – Abraham and Mary Todd Lincoln. Today, few places in America match Obed and Isaac’s historic flair, contemporary atmosphere and delicious beverages.

Located in Chicago’s Logan Square, Revolution Brewing is the largest independent brewery in Illinois. Beer aficionados come from across the planet to experience its brewpub and taproom, where Revolution produces dozens of beer styles, from IPAs, porters, pilsners, Belgian-style, pale ales and barrel-aged beers. With master brewer Jim Cibak at the helm, Revolution has earned a reputation as possessing one of the most impressive beer menus in the United States, and has been placed on the Brewer’s Association’s Top 50 craft beer list.

Scratch Brewing Company, in the Southern Illinois town of Ava, is a microbrewery and farm that resides five miles from the Shawnee National Forest. This bucolic location has earned Scratch a reputation as one of the most idyllic sites to drink beer in the world. Scratch embraces its roots by creating alcohol from farmed and foraged ingredients directly from the land surrounding it, and offers an exceptional selection of beer tastes that include nettle, elderberry, ginger, dandelion, maple sap, hickory, lavender and juniper.

A local harvest is at the heart of Tangled Roots Brewing. Located in Ottawa, a town at the confluence of the Illinois and Fox Rivers, Tangled Roots makes use of its fertile surroundings to plant, cultivate and harvest its hand-grown hops and barley just south of the brewery’s home base. Tangled Roots is one of only a few breweries nationwide to grow 100 percent of its own hops and barley. That independent spirit stays true at its brewpub, The Lone Buffalo. Occupying a theater building from the 1800s, the facility repurposes a historic venue for a more modern craft—its rustic decor pairs well with views of working vats and other brewing equipment.

Those seeking a closer look at the game of baseball can see where many professionals get their most valuable piece of equipment.

Ridgway is a small village in southern Illinois that is home to less than 1,000 people. It is also the home of Dinger Bats, the brainchild of Kyle Drone who founded the company with his father Randy. In Dinger Bats’ earlier days, Kyle made bats for players he knew from his time playing college baseball. Since then, the company, whose manufacturing plant resides on the edge of the Shawnee National Forest, has grown to the point Chicago Cubs slugger Kyle Schwarber used a Dinger Bat in the 2016 World Series, where he hit a robust .412. Schwarber is one of dozens of young sluggers who step up to the plate brandishing a Dinger Bat, which has earned a reputation as one of the best bats in the industry.

Fans of the National Pastime can visit Homewood Bat Co., a baseball bat boutique in Homewood that was born in 2015. Since its inception, owner Todd Pals has created bats for little leaguers, college sluggers and even Major League Baseball players, including 2016 World Series Most Valuable Player Ben Zobrist. Homewood Bat Co. is one of only a select few makers authorized to sell to Major League Baseball, as the company manufactures and sells professional grade, wood baseball bats made from ash, yellow birch and maple. Visitors can watch the bat-making process at the facility and a batting cage enables patrons to test the bats onsite. Those wishing to have their bats personalized will receive a laserinscribed bat in under an hour.