EXPLORING ARIZONA: This Beautiful State Has Something For Everyone 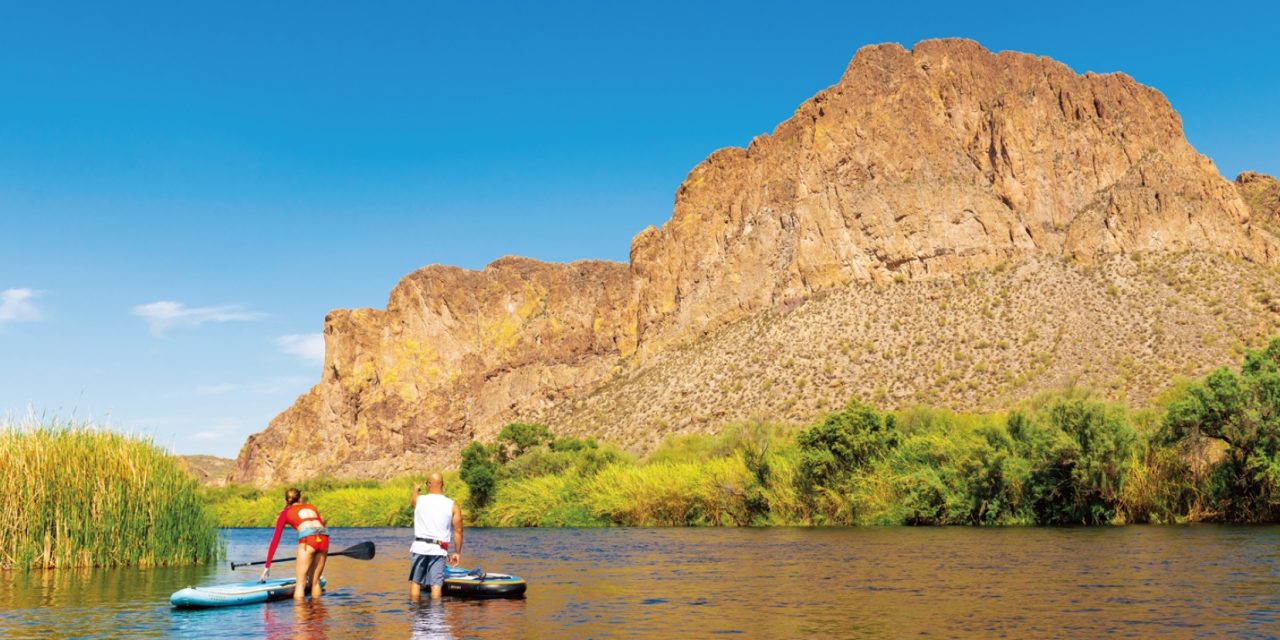 From North to South and East to West, the Grand Canyon State abounds with family-friendly sights and activities

Whether it’s urban amenities, fun on the water or frolics in wide-open spaces, Arizona simply offers the best of the West.

For the traveler, Greater Phoenix has every kind of recreational, cultural, dining and retail experience imaginable. Sprawling across the Sonoran Desert in the middle of the state, it is one of the country’s largest metropolitan areas and lacks for nothing. Known as the Valley of the Sun, this population center comprises not only Phoenix but also Mesa, Scottsdale, Tempe, Glendale, Chandler, Gilbert and a dozen or so other communities. Some of the nation’s best resorts, renowned for their golf courses and luxurious spas, make the Valley a year-round vacation destination.

Those new to the Valley are surprised to find so many parks, preserves and other easily accessible oases where they can commune with nature and enjoy outdoor activities. Phoenix’s South Mountain Park and Preserve, the world’s largest city park, is a vast wilderness with mountaindesert trails for hiking, biking and horseback riding.

In the middle of Gilbert, the paved trails at Riparian Preserve at Water Ranch are frequented by bird- and wildlife-watchers; the sanctuary also has a fishing lake and covered picnic areas. Desert Botanical Garden, on 150 acres just outside downtown Phoenix, showcases more than 4,000 species of cacti, succulents, trees and flowers.

Desert environments aren’t normally associated with bodies of water, however Greater Phoenix overflows with refreshing options on its lakes and rivers. Kayak, pedal boat and paddleboard rentals are available for exploring Tempe Town Lake in downtown Tempe. In the Lower Salt River Recreation Area in Tonto National Forest, visitors who go tubing and kayaking down the Salt River may see wild horses cooling off at river’s edge and grazing on underwater foliage. Located near Mesa, the popular playground, with its three lakes and two rivers, attracts boating, rafting and fishing enthusiasts as well.

Lush golf greens also provide a striking contrast to the arid landscapes. Some 200 courses in the Valley of the Sun cater to every skill set and budget. Many of these public and resort courses come with spectacular mountain views.

Golfers can sharpen their skills in style at TopGolf’s hightech driving ranges in Gilbert, Glendale and Scottsdale. Each location has dozens of climate-controlled bays for hitting microchipped golf balls at a target on the field. Amenities include a restaurant, multiple sports bars, musical entertainment and a rooftop terrace with fire pit.

Spectator sports also are a big visitor draw in Greater Phoenix. Every February and March, 15 Major League Baseball teams come to compete in spring training games at 10 stadiums throughout the area. Among the most highly attended Cactus League venues are Scottsdale Stadium, spring home of the San Francisco Giants, and the Chicago Cubs’ Sloan Park in Mesa. During the regular Major League season, the hometown Arizona Diamondbacks play at airconditioned Chase Field in downtown Phoenix.

At shopping/dining/entertainment complexes throughout the Valley of the Sun, families find indoor fun galore. Arizona Boardwalk in Scottsdale, for example, is home to Odysea Aquarium; Butterfly Wonderland, the largest conservatory of its kind in the country with more than 3,000 free-flying butterflies; and Pangaea: Land of the Dinosaurs, a collection of more than 80 animatronic beasts from the prehistoric past.

Arizona Mills in Tempe, the state’s largest outlet mall, houses SEA LIFE Arizona Aquarium and LEGOLAND Discovery Center, a play place for children ages 3-10. Kids can get creative in a variety of activities at Crayola Experience in Chandler Fashion Center, the state’s second largest shopping mall (after Scottsdale Fashion Square). Mavrix, an amusement center with 22 lanes of bowling, 85 arcade games, laser tag and places to eat and drink, entertains kids and parents alike at The Pavilions at Talking Stick Shopping Center in Scottsdale. Also popular with families are the Musical Instrument Museum in Phoenix and the Phoenix Zoo.

Tucson, the state’s second-largest city, is the tourist magnet of southern Arizona. Like Greater Phoenix, it boasts a number of high-end resorts and has some bigtime attractions. Pima Air & Space Museum claims one of the largest private collections of aircraft in the world; on display in hangars and outside are more than 300 planes, including World War II fighters and an Air Force One used by Presidents Kennedy and Johnson. Providing a great introduction to desert plants and wildlife is the Arizona- Sonora Desert Museum, a zoo, aquarium, botanical garden and natural history museum all rolled into one.

In the far northwestern corner of Arizona, Lake Havasu’s 450 miles of shoreline set the stage for some of the state’s best water recreation. On this dammed section of the Colorado River, one can rent everything from water skis and kayaks to small fishing boats and roomy houseboats. The planned community of Lake Havasu City stakes its claim to fame on the London Bridge, a stone-by-stone reconstruction of the fabled bridge that spanned the River Thames from 1831 until 1968. A must-do is walking across the bridge or passing under it by boat.

Flagstaff, set against the backdrop of pine forests and snow-capped peaks, is a thriving college town that many travelers visit on their way to and from the Grand Canyon, 80 miles to the north.

At Arizona Snowbowl, a small ski resort, summer visitors can hop aboard the Agassiz ski lift, which provides a scenic ride through the Coconino National Forest. Lowell Observatory gives tours during the day and at night allows guests to use its telescopes for viewing the planets, stars and other celestial wonders. Storied Route 66 passes through the heart of downtown Flagstaff, a delightful historic district full of shops, eateries and landmark buildings.