The following article appeared in the Virginia State Sports Guide. Download the full guide below. 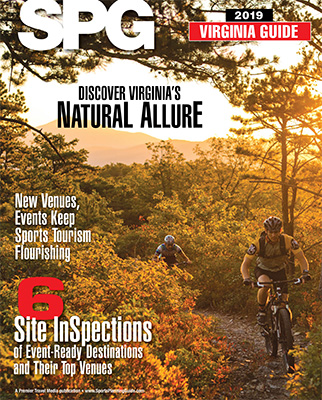 A community’s commitment to investing in sports tourism comes from the support of numerous entities. That backing comes from local tourism officials, parks and recreation, city council and the area residents that so often carry the volunteer responsibilities. It’s a formula for success.

In August 2018, the City of Virginia Beach broke ground for the new 285,000-square-foot Virginia Beach Sports Center. By the fifth year, there’s a projected potential of 68 events on the combined courts and track. That’s a significant increase over the last fiscal year when just 20-percent of the 93 sporting events held in Virginia Beach were indoors. With this facility, the Hampton Roads Sports Commission has the opportunity to recruit events that before were unattainable. A case in point is the track at Norfolk State University. It is a great venue, and with the center’s new indoor track that meets NCAA standards, NCAA Division I and IAAF events are possible. There will be spectator seating for 4,400. The courts will accommodate basketball, volleyball, wrestling, gymnastics, cheer and field hockey. Construction is scheduled to begin on the $68 million project in December with a planned opening in 2020.

Virginia’s Blue Ridge has been awarded a Silver-Level Ride Center designation by the International Mountain Bicycling Association (IMBA). David Wiens, executive director of IMBA said, “The new status puts Virginia on par with some of the greatest mountain bike destinations.” The designation took nearly two years of hard work by many people, including the trail work dome by IMBA Roanoke Chapter and resulted in being the only Silver-Level Ride Center on the East Coast. It’s believed the Ride Center designation will result in increased visitation and competitions, economic activity and supported jobs in Virginia’s Blue Ridge.

Glover Park (previously Greenwood Park) is near Richmond in Henrico County and opened in May 2018 with a brand new 88-acre tournament facility. There are four multi-purpose lighted synthetic athletic fields with an additional stadium field. The eight sand volleyball courts are sized and spaced to NCAA standards accommodating doubles, fours and sixes play. A pavilion, a large restroom building and children’s playground completes the new venue. Four sand volleyball courts are located a short drive from Glover Park at Pouncey Park provide an auxiliary facility.

In Lynchburg, the Liberty University Natatorium is now open. The 75,000 square foot state-of-the-art facility meets all the specifications for NCAA Division I swimming, diving and water polo. The facility features a nine-lane, 50-meter pool with a movable bulkhead. The 25-yard pool can also be divided into 20-lanes for short course exercises. The diving well can also be fashioned for eight additional lanes permitting multiple teams to practice. The 17-foot diving well has a three column tower of one, three, 7.5 and 10-meter platforms. One and three meter springboards are also part of the diving well.

In Leesburg in Loudon County the ION International Training Center will open as a year-round, twin sheet indoor ice rink and Arena. The National Hockey League-sized rinks host professional and recreational figure skaters, ice dancers, pair skaters and hockey competition. Stadium seating for 3,500-4,200 circles the one rink. The facility services everyone from beginners to elites, local and international skaters. The multi functional floor can also be used for non-ice related events.

As these new venues come onboard, it may be three to five years before they begin to reach capacity. Even before then Virginia has attracted some significant new events for 2019 and beyond. Here are just a few.

March of 2019 and 2021, the NCAA Division III Women’s Basketball Championship will be played at Cregger Field House on the campus of Roanoke College. Four teams will be coming to Roanoke to vie for a National Championship.

July 31-August 4, 2019 in a collaborative effort between Virginia Amateur Sports, Liberty University and the City of Lynchburg the State Games of America will be coming to Lynchburg. This is the first time Virginia has been selected to host this Olympic-style event completion that will attract almost 15,000 medal winners from State Games throughout the U.S.

September 2019 brings the United States Women’s Disc Golf Championship (USWDGC) to Spotsylvania. The USWDGC event is one of the largest women’s disc golf competitions in the world.

July 29-August 8, 2020 the Hampton Roads region will be the site for the AAU Junior Olympics. The showcase event for the AAU Sports Program is the largest national multi-sport event for youth in the United States.

Big time venues and big-time events, Virginia has a history of having both. To learn more of what Virginia has to offer visit online at the Sports Virginia website Sportsvirginia.org. #SportsVirginia