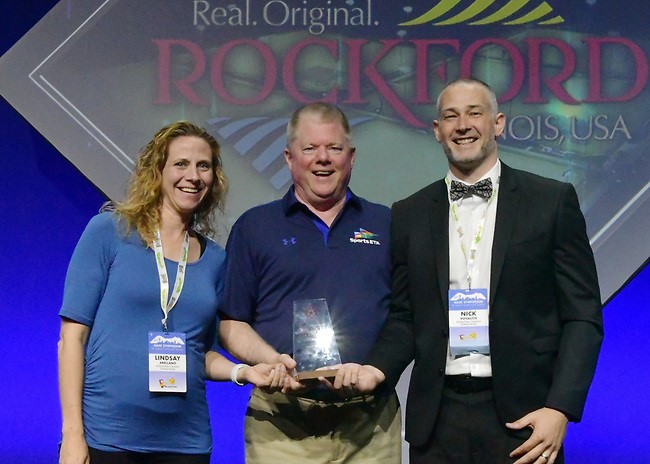 In the waning moments after Fred VanVleet helped the Toronto Raptors capture the franchise’s first NBA Championship last month, he turned to the camera following an interview to give a shout out to his hometown of Rockford, Illinois.

The Larry O’Brien Championship Trophy wasn’t the first piece of hardware that representatives from Rockford had won this summer, however. Rockford CVB won the Destination Branding and Marketing Campaign of the Year, Under 500K award at the 2019 NASC Symposium, held in Knoxville this May.

Rockford’s Bring Your Game 2 Rockford (BYG2RKFD) campaign was designed with the intent to showcase what sports tourism means to Rockford and built for long-term development to create a foundation for the sustainability of sports tourism. Rockford CVB emphasized the value of both the residents and visitors to create a stronger tourism product.

Nick Povalitis, Director of Sports Development for Rockford CVB, explained how their campaign achieved success through mixing tradition and disruption.

“The game plan included traditional efforts like trade publication advertising and trade show sponsorships, but we’ve continued to do a significant amount of targeting,” Povalitis said. The campaign utilized customized gifts, such as socks, bow ties, table tennis paddles and more. They also promoted their campaign through digital geofences, such as using LED billboard trucks to circle event sites within the market. Strategically placing their digital geofences allowed them to target national governing bodies. In 2018 the Bring Your Game 2 Rockford campaign generated nearly 5.7 billion media impressions.

“You name it, we’re trying to execute it,” Povalitis said.

The most important takeaway, he said, is that the customer is always first. Rockford’s campaign takes a narrow focus approach that’s built authentically around their strengths.

“There are so many avenues of quality content for prospects and clients to choose from that we have to target wisely,” Povalitis said.

The first step is giving the client the information they need. Within the past five years, the Rockford sports tourism industry has successfully added diversity to their event portfolio. Through adding first-time events they’ve also been able to incorporate event production and operations activities.

Being rewarded for its efforts wasn’t the end goal for Rockford CVB.

“Our mentality is of one where we feel like we’re just scratching the surface of what we can accomplish. The unknown success and the learning process to get there is what is most exciting,” Povalitis said.

NASC’s recognition simply verifies that they’re on the right path.

“Most importantly it’s motivating us to continue to do more,” Povalitis said.

“The plan is to keep bringing in national events for our community to drive economic impact while also leveraging those relationships for long-term growth and sustainability,” Povalitis said.