The following article appeared in the South Carolina State Sports Guide. Download the full guide below. 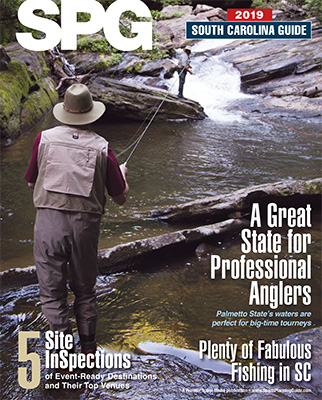 In mid-March of 2018, the Bassmaster Classic was held on Lake Hartwell in South Carolina’s upstate region. This is the third Classic on Lake Hartwell and the first since 2015, which had the third highest attendance of any Classic. More than 100,000 people were spread between the Green Pond Landing launch site in Anderson, the weigh-in at Bon Secours Wellness Arena, or the trade show at the TD Convention Center, the latter two taking place in Greenville.

The anticipated $23 million economic impact of the Classic was exceeded. Visitor spending impacted hotels, restaurants, retailers and gas stations. The 30-acre, deep water Green Pond Landing facility was opened just prior to the 2018 Classic. Between the Geico Bassmaster and Walmart FLW tournaments along with numerous additional competitive events, it’s estimated the launch site alone will have an economic impact of more than $10 million annually.

South Carolina is home to numerous fishing tournaments that have a sizable economic impact on the state.

August 2017 was the third time the Fishing League Worldwide Forrest Wood Cup had been held at Lake Murray, near Columbia. Fiftythree of the world’s best anglers competed in the FLW’s leading event. According to the Capital City/Lake Murray Regional Tourism Bureau, the 2008 three-day event had a mouth-dropping $46 million economic impact followed by a $24 million impact in 2014. The year 2017 continued the string of bringing millions to the Lake Murray region.

FLW credits three reasons for returning to Lake Murray: The fishery, the facilities and the community. The FLW points out that only four times since the inauguration of the annual cup has an angler brought a five bass limit exceeding 20 pounds to the weigh-in. Two of those four times were on Lake Murray. The weigh-in site at the Columbia Metropolitan Convention Center and launch site at Dreher Island State Park are premier facilities. The state’s capitol city Columbia is centrally located in the state with easy interstate highway access.

Closer to the coast, the 2018 Academy Sports + Outdoors B.A.S.S. Nation Eastern Regional presented by Magellan Outdoors, was held in June of 2018. When the initial action was completed, there were 112 that survived the cut in this unusual format. There were 56 tournament boats on the water, each with a non-boater. Winyah Bay was the fishery, including the five rivers that converge, and Georgetown was the host for the tournament. In 2016, Georgetown got on the map as a community cable of hosting an event when the Bassmaster Elite Series came to town. Along with the Elite Series, the Winyah Bay Heritage Festival coincided and became a must for anglers and outdoorsmen. Earlier, smaller tournaments had economic impacts of $500,000. The larger tournaments with more competition and practice days anticipated an impact exceeding $2 million.

From Little River to Hilton Head Island, there are saltwater fishing tournaments departing from marinas all along the coast. Beginning in mid-February, the calendar of competitions is full. For one-day tournaments with local participation, it’s almost impossible to measure the economic impact for an area. Even the South Carolina Wahoo Series that runs daily from mid-February to April 15 is difficult to gauge with boats leaving from multiple marinas daily.

Regardless of the season, the Palmetto State hosts fishing tournaments almost every week.

In Charleston, the Lowcounty “Fish Scales” website lists a half dozen tournaments including the Charleston Trident Fishing tournament’s weekly results. In 2019, this legendary tournament will enter its 53rd year. The Carolina Lady Anglers’ 22nd Fishing For the Cure Tournament in early June 2019 is a regional favorite. Benefitting the Palmetto Warrior Connection, the Lowcountry Open, like many one-day events, passes on a portion of every registration fee to a worthwhile cause. The 26th Annual Fishing for Miracles King Mackerel Tournament benefits MUSC Children’s Hospital Pediatric Intensive Care Unit.

and their crews to Hilton Head Island. Likewise, the three-day Bohicket Marina Invitational Billfish Tournament departing from the marina located between Kiawah and Seabrook certainly has an economic impact on the community.

On the farthest northern point of South Carolina’s coast, Little River hosts some fun tournaments with generous payouts. The 16th Annual Rumble in the Jungle attracts boasts and crews from as far away as Florida and Virginia in mid October. It’s held during the peak of King Mackerel season.

Regardless of the season, freshwater or saltwater, professional, or amateur anglers, there are tournaments almost every week in South Carolina benefiting a local community. To learn more about bringing your fishing tournament to South Carolina visit the South Carolina Sports Alliance at discoversouthcarolina.com/sports-alliance.