Rock with Corey, Roll with Vets in Honor of Rockton Native Corey Anderson 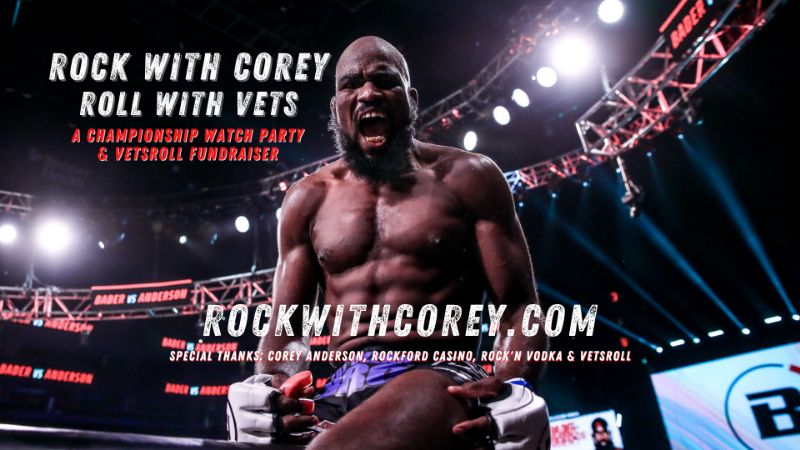 Rock with Corey, Roll with Vets will feature the entire Bellator 277 fight card on the Midway Bar and Casino big screens, beginning with prelims at 6 p.m. and culminating with the main card at approximately 9 p.m. CT when Anderson takes on Vadim Nemkov for the Bellator light heavyweight world championship. Free and open to ages 21 and older, the watch party will feature surprise giveaways and bring the community together to cheer on one of its most iconic native athletes. In addition, Rock with Corey, Roll with Vets will serve as a fundraiser for local nonprofit VetsRoll, Inc®, of which event attendees will be encouraged to make a donation.

“I’m excited to have a local event in my hometown where everyone can come out and watch my biggest fight to date, while also supporting a local cause that helps veterans,” said Anderson.

For more information or to make a donation in advance online, head to www.RockWithCorey.com and follow the Rock with Corey, Roll with Vets Facebook event page.

“VetsRoll, Inc® is thrilled to be selected by hometown hero Corey “Overtime” Anderson as the veteran charity of his choice for the April 15th watch party at the Hard Rock Rockford,” said Mark Finnegan, president of VetsRoll. “Corey’s choice to support the veteran community in his hometown, while he competes against defending champion Vadim Nemkov from Russia for the Bellator Light Heavyweight Championship title in San Jose, just shows us Corey will never forget his upbringing here in the Midwest. What an honor this is for VetsRoll and what an opportunity for us to showcase Rockford, IL, to the entire nation!”

Born in Rockford and raised in Rockton, Anderson wrestled at Hononegah High School before an All-America collegiate career at the junior college and NCAA Division II and III levels. In 2014, he jump-started his professional mixed martial arts career by winning The Ultimate Fighter (TUF) to earn a contract with Ultimate Fighting Championship (UFC). After climbing to the top of the UFC rankings, Anderson joined Bellator in 2020 where he has won all of his fights to advance to the Bellator light heavyweight world championship bout.