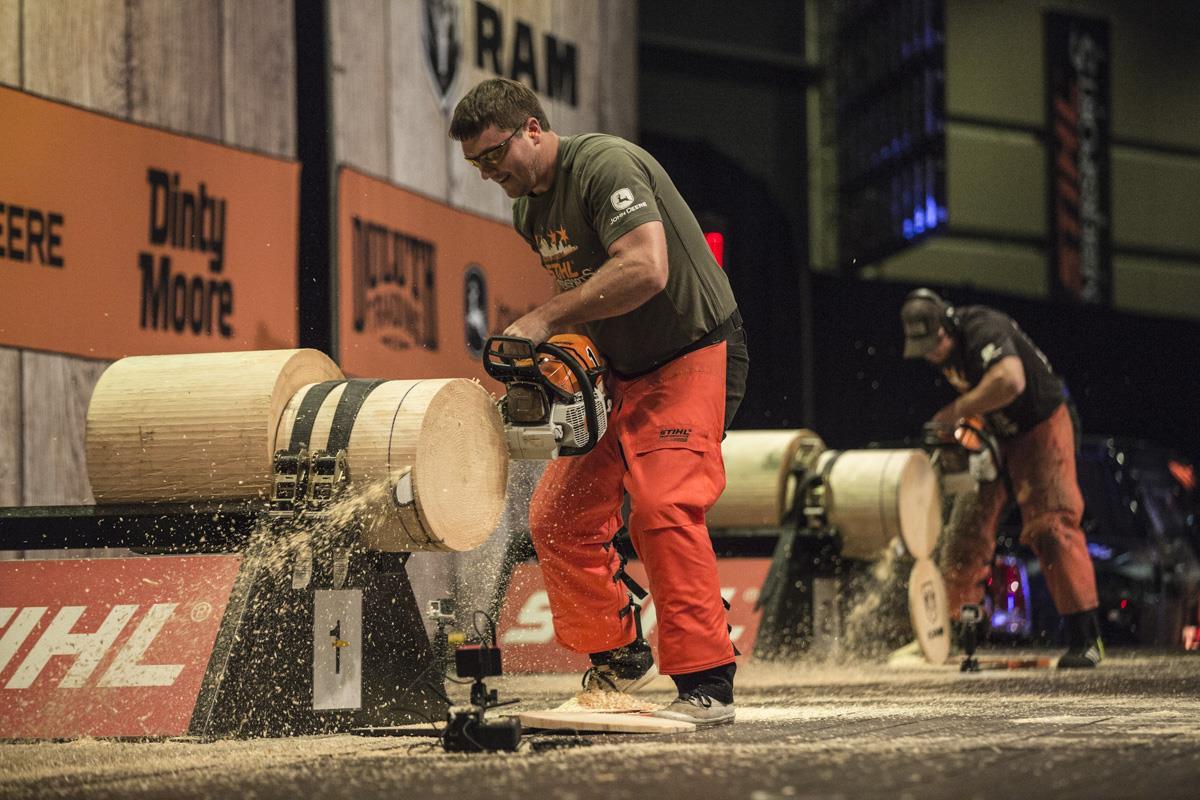 Every sports tournament is different, which means there’s no magic formula for how to market one. Even experienced organizers and destinations struggle to find the right strategies that will get tickets sold and bodies in seats. It’s easy to fall back on traditional methods, keeping fingers crossed that enough of the same thing will continue to work.

Sometimes, though, you need to mix it up. Try something different. Think outside the box.

Chicago Southland Convention and Visitors Bureau and the Tinley Park community had the opportunity to do just that when they landed the STIHL® TIMBERSPORTS® US Championships, where lumberjack athletes compete in a variety of disciplines based on traditional logging skills. It was the first time the event had come to Illinois, and Chicago Southland and STIHL® TIMBERSPORTS® wanted to swing the perfect block chop (pun intended).

Chicago Southland and STIHL® TIMBERSPORTS® worked together to create some incredibly unique grassroots efforts that made their event stand out. From the beginning the team was very boots to the ground on the initiative, according to Juston Teach, communications manager for Chicago Southland.

The first element was the press release. “We could have easily just sent out a paper press release, and gotten our normal response,” says Joel Koester, sports sales manager for Chicago Southland. STIHL® TIMBERSPORTS® has had success with laser etching into slabs of wood, so they decided to do that with the press release.

“And we said, we don’t want to just send this out,” says Koester. “We want to be there to hand deliver it to them and talk about the event.”

Delivering the media kits in person was much more personal, and the feedback they received from journalists was glowing.

“We had editors tweeting pictures of the press release saying this was the coolest thing they’ve ever seen,” says Teach. And really, how can you ignore a huge slab of wood on your desk?

Along with the wooden press release, STIHL® TIMBERSPORTS© designed a custom logo branded with the Chicago Southland. The logo appeared on the website, social media, marketing collateral, merchandise and even the championship trophy. The concept of the logo is due in large part to the partnership Chicago Southland and STIHL® TIMBERSPORTS® developed, according to Teach.

“They wanted people to know that the event was not hosted downtown, but it was hosted here in Chicago Southland,” says Teach. While it seems like a simple idea, a customized logo represents the kind of relationship formed between the CVB and the sports organizers. It was a joint effort, from inception to conclusion. 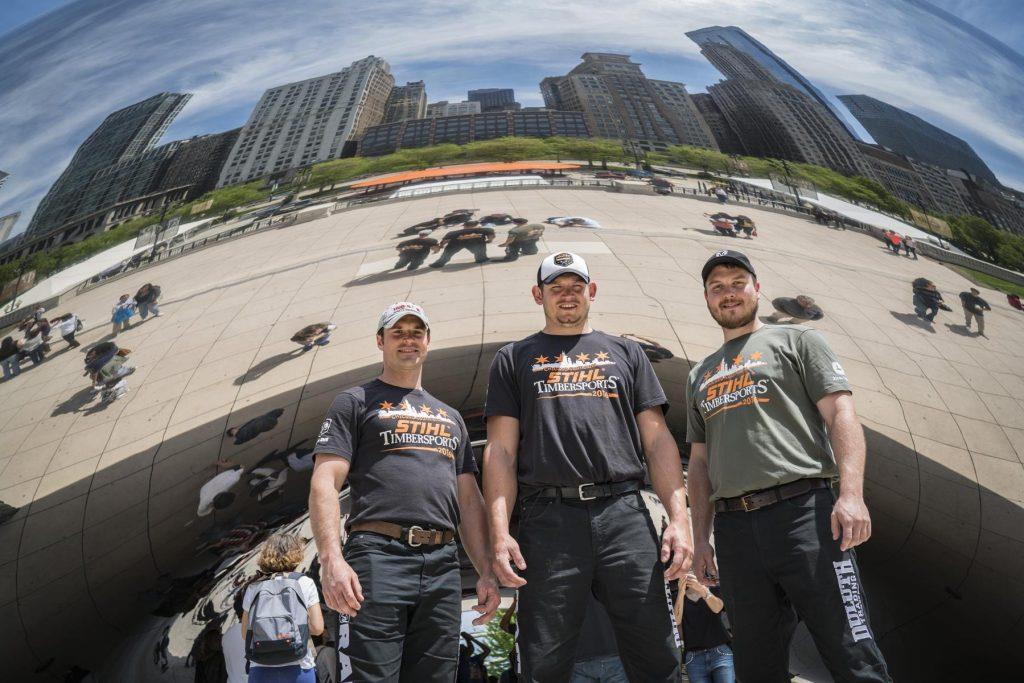 As Chicago Southland was pursuing STIHL® TIMBERSPORTS®, another opportunity came to their attention: US Log Rolling. Once a part of STIHL® TIMBERSPORTS®, log rolling had spun off into its own event, and Koester decided it would be a great event to host in addition to the lumberjack series. Better yet, it could be used as a promotion tool.

Local Engagement: A True Taste of the Destination

One of the most successful marketing methods for Chicago Southland and STIHL® TIMBERSPORTS® was the community involvement.

“Local engagement was huge in this,” says Teach. “We knew one of the keys to success was getting local businesses involved to help promote the event.”

The Tinley Park Convention Center played a major role in this.

“We had to create energy around the event that would draw a diverse crowd,” says Daniel Fitzgerald, managing director, Holiday Inn Hotel & Tinley Park Convention Center. “We teamed up with 350 Brewing Company in Tinley Park and Dark Horse Brewing Company from Marshall, Michigan, to create craft beers especially for this event.”

They created Log Tears and Misery Whip in honor of the lumberjacks, and one was even brewed with sawdust in the mash, talk about going all out.

“We loved 350 Brewing Company developing a specialty beer for the Championships,” says Brad Sorgen, executive producer, STIHL® TIMBERSPORTS® Series. “That really demonstrates just how passionate this region was to host us.”

To highlight the community and introduce the lumberjacks to the region, Chicago Southland CVB and STIHL® TIMBERSPORTS® produced a variety of video vignettes.

“The important thing about the vignettes is we wanted to represent Chicago and the south/southwest suburbs all in one,” says Teach.

One thing people often associate with Chicago and surrounding areas is pizza, specifically deep dish. Chicago Southland teamed up with Aurelio’s Pizza to host some STIHL® TIMBERSPORTS® athletes at the restaurant, where they had an axe-chopping demonstration for patrons. The lumberjacks put their cooking and eating skills to the test, too, rolling out their own pizzas and going up against a professional food eater.

Similar filming was done in Chicago to highlight some popular experiences there. Lumberjacks went through fire fighter training at the oldest firehouse in the city and then raced up the stairs of Willis Tower, all the way to the top. Every experience was turned into a short video that was displayed on social media, helping to promote the STIHL® TIMBERSPORTS® US championships, generate excitement and gain more than 36 million media impressions, a number that is expected to increase with continued promotion. The videos will also air on TV following the event, promoting the broadcast date in September and October, with a goal to get as many viewers as possible.

The community engagement not only helped promote the event on a local and national level, it also made the lumberjacks feel welcome and gave them a memorable experience. Many of the athletes have been doing this for 15 or 20 years, and they travel all over, but the experience they had in the Chicago Southland was something they said they would never forget, according to Koester.

“That’s the reaction we want from groups when they come here,” Koester says. “When they leave, this is the best experience they’ve had.”

While all of these strategies played a role in promoting the Championships, and led STIHL® TIMBERSPORTS® to the fastest sellout for spectators in the event’s history, there was another factor that generated the success: Passion. The Chicago Southland, STIHL® TIMBERSPORTS® and the whole community, from the beginning, was passionate about the event and bought into it 100 percent. To have a successful event, there needs to be a true sense of commitment and enthusiasm around it.

“The community really supported our event,” says Sorgen. “The entire region welcomed our sport with open arms. This type of community buy-in really helps our sport reach a large group of fans and gives us even more incentive to show them just how exciting our sport is.”

“The Tinley Park community was extremely glad to have STIHL® TIMBERSPORTS® in town,” says Dave Seaman, Tinley Park mayor. “It was certainly an exciting time for everyone involved.”

The Championship Series was something everyone could be part of, and it brought businesses and residents together for a common goal. That unity and dedication provides a little more promotional power.

The marketing playbook for every event will be different, and sometimes the typical tactics may not be enough. But with commitment, local support, some imagination—and maybe some saw dust beer—it’s possible to create a winning game plan.