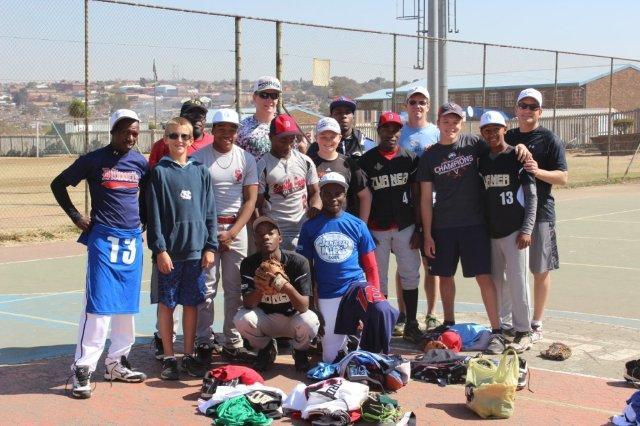 Once in a blue moon, there comes along an idea that everyone can get on board with—a good cause that truly has no gimmicks or scams. What’s even rarer is when this idea is born in the most unlikely circumstance. Turn Two for Youth’s story begins when two close friends and their families were vacationing in the Turks and Caicos Islands.

While deep-sea fishing, Billy Owens and Eric Smith chatted up the ship’s captain. They learned he was not just in the fishing business, but he was also a youth baseball coach. They were upset to hear the kids were using—sharing—torn-up gloves and makeshift equipment. Helmets? Nope. Cleats? Forget about it. The captain asked if the two friends had any extra equipment they could send back. Moved and inspired, Eric and Billy made a promise to send what they had lying around, not imagining that the gesture would snowball to create this organization.

Less than a year later, they one-upped their vow by sending more than what they had collecting dust in their own homes. Their plan was simple; they organized a grassroots collection effort in their hometown of Charlotte, North Carolina. In came bats, gloves, uniforms, catchers’ equipment, batting tees and an assortment of other provisions from local baseball families. Billy and Eric were pleased to find that donors were more than willing to clean out their closets. The two friends shipped a full container (the size of a tractor trailer bay with approximately 3,200 pounds’ worth of equipment) to a ministry team in Turks and Caicos that distributed the equipment—all at their own expense.

Eric and Billy thought that would be the end of it. But then fate came off the bench. Billy’s son, Bo, had an opportunity to go on a baseball tour of the Dominican Republic. When he returned to the States, Billy noticed all his equipment was missing.

When Billy asked his son about this, Bo simply replied, “I saw some guys on the team playing against us with just cardboard on their hands, so I gave them my equipment.” The drive to collect for players in the Dominican Republic was sparked.

That initial grassroots campaign became the model for a formal, nonprofit organization to take the next step with the Dominican Republic. Their goal is to build a network of volunteers through other baseball families who simply want to give back to the game they love.

“Turn Two is not about making money; it’s about our love of baseball and wanting to share the things we learned on the baseball field about teamwork, managing people and competing with others with today’s youth,” said Eric. “We want to make sure the kids have whatever they need to go out and enjoy the game and learn some good life lessons.”

The 2015 campaign focused on delivering a full, 20-foot container of bats, gloves, helmets, cleats and uniforms to the Dominican Republic.

To make this happen, Turn Two for Youth set up partnerships with Triple Crown Sports, the American Legion World Series, the Charlotte Knights (minor league affiliate of the Chicago White Sox), Mingo Bay Baseball Classic, Jack Sink Spring Break Classic and International Paper Baseball Classic. Turn Two put out bins and created a volunteer workforce to collect and manage the logistics in Myrtle Beach, South Carolina at the Triple Crown Sport Summer National in July; in Shelby, North Carolina at the American Legion World Series in August; in Charlotte at a Charlotte Knights’ home game in August; in Charlotte at the Jack Sink Spring Break Classic in April; and in Georgetown, South Carolina at the International Paper Baseball Classic in March. Once equipment was collected, it was shipped to Charlotte to be cleaned, refurbished and stored until a complete container of gear was ready to be shipped to the Dominican Republic.

Turn Two carefully selects credible volunteer organizations on the receiving end to ensure the equipment is delivered and distributed as intended. In this year’s campaign, Turn Two for Youth established a strategic partnership with Major League Baseball (MLB), which ensured that the shipment was distributed through its Dominican Republic-based MLB Academies that provide opportunities for young players to learn the game.

Take a moment to think back on your favorite sports memory. Were you a player? A coach? A fan? Did you feel empowered, like you could conquer the world, even if just for a fleeting moment? Now, here’s the too-often overlooked question: was the equipment ever an issue? Did you ever think to yourself, “If only I had better shoes, I could run just a little faster,” or “Imagine how far that ball would fly if he was using a bat and not a two-by-four”? Poor equipment is stopping young players from experiencing that same moment that made you feel 50 feet tall, and you have the power to do something about it.

Anyone can get involved on any level, whether you are a one-time donor, volunteer ambassador or an event planner who can host collections at tournaments.

“Anytime you have a baseball or softball event where you can host a collection, we’ll make sure the goods get to someone who needs them,” said Eric. “It’s not a huge time commitment on your part; we’re just asking for you to tell the coaches to tell their players and parents to bring along their extra equipment.”

So spread the word, clean out garages, closets and storage units and visit turn2foryouth.com to learn how you can be a part of this movement. Miracles happen when we step up to the plate and do the right thing.