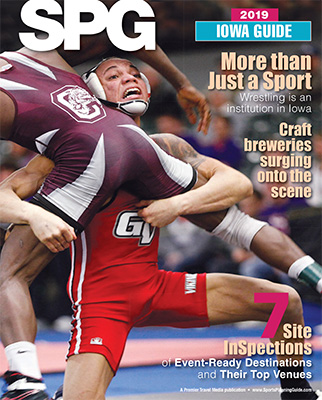 A vibrant city overflowing with exciting sports events, inimitable attractions, a plethora of restaurant and lodging options and Midwestern hospitality, Cedar Rapids is a quaint yet accommodating Midwestern city, otherwise known as the “City of Five Seasons.” Furthermore, Cedar Rapids is the largest corn-processing city in the world and one of the largest manufacturing regions in the United States.

A city historically known for its bustling art scene, Cedar Rapids is home to famous native Iowan painter Grant Wood’s idiosyncratic art studio and the largest collection of Wood’s work at Cedar Rapids Museum of Art. Beyond its local attractions and vivacious art scene, Cedar Rapids is home to several affordable, world-class sports facilities, inviting planners and teams to come and host their upcoming sports event. From top-notch baseball venues to multi-use arenas, Cedar Rapids has what your team is looking for in world-class competitions, tournaments and championships.

Opened in 2002, Veterans Memorial Stadium is home of the Cedar Rapids Kernels, the Class-A affiliate of the Minnesota Twins. The 5,300-seat stadium has facility parking with a capacity for 1,200 cars and has hosted various competitions and events, including NCAA Baseball Championships, the American Legion World Series and Perfect Game USA, the Kernels Foundation World Wood Bat Tournament. The Kernels Foundation is a proud charity arm of the Cedar Rapids Kernels, providing the underprivileged youth of the community the dream to play baseball free of charge and offering a memorial scholarship to first year college students.

Automated irrigation systems throughout 32 fields make Tuma Soccer Complex one of the largest soccer facilities in the Hawkeye State. The facility’s fields can be set to your team’s specifications and feature two 50 by 120-yard youth football fields. Further amenities at the complex include hard-surfaced parking for over 950 vehicles, overflow parking for 250 vehicles and a 5,600 square foot pavilion with restrooms, concessions and a covered seating area. The pavilion seats 325 spectators and the open patio seats 320. Competitions and sporting events at Tuma Soccer Complex include the USA Ultimate Old Capitol Open, the Pre-Season Regional Chill-Out Soccer Tournament, the Kick-It 3v3 Soccer Great Plains Regional Championship, and US Quidditch Midwest Regional Championships.

Projected to open in the spring of 2019, Prospect Meadows will be a new multi-million-dollar complex situated on 128 acres. This eight-field complex will have eight turfed infields and four lighted fields. Field dimensions are estimated at 380-feet to center and 320-feet down the lines. Amenities at Prospect Meadows will include portable fencing, a miracle field for persons with special needs, seating, sound systems, concession stands, scoreboards, 1,200 parking spaces, a walking path and nearby lake. The second phase of construction for the complex will feature an additional eight fields with 300-foot fences set to open in the near future.

Things to do in Cedar Rapids

Sporting events are about more than just taking home the gold, they are also about making memories and hosting events in cities with plenty of activities to enjoy when off the fields and courts. NewBo City Market is one of Cedar Rapids’ cherished pastimes and was even once graced by the presence of former President Bill Clinton. With 28 different food and drink stands, the market serves everything from homemade Korean dumplings to Iowa-grown popcorn.

Indian Creek Nature Center has been a leading center in sustainable building and operation practices for decades. The center nurtures individuals through environmental education, provides leadership in land protection and restoration and encourages responsible interactions with nature. For adult spectators looking for an enjoyable getaway during long practices that will make you feel like a kid again, Quarter Barrel Arcade and Brewery is an industrial, brick-walled brewpub featuring classic arcade games, craft beer and innovative pizzas.

Our 2017 festival — our 70th annual! — was held in Cedar Rapids. Cedar Rapids was a combination of Midwestern hospitality, affordability, truly spectacular venues, and a friendly, fun city for our jugglers to spend their week in making for an amazing week of fun, world-class competitions and excitement for all involved.”

The partnership between Cedar Rapids and the Iowa Girls High School Athletic Union is indeed a true partnership. One of their primary strengths is the attention and cooperation they provide to our staff, the teams, and the fans. Their main focus is to provide the services we need in order to make sure our tournament runs smoothly. We appreciate their professionalism and the relationship we have developed with their staff. The IGHSAU values the cooperation we receive from Cedar Rapids, the community, and its leaders to showcase the Iowa Girl.

How to Get to Cedar Rapids

By Car: Cedar Rapids can be reached by Interstate Highway 380 via I-80. Major cities located within a five-hour drive from Cedar Rapids are Chicago, St. Louis, Milwaukee and Minneapolis.