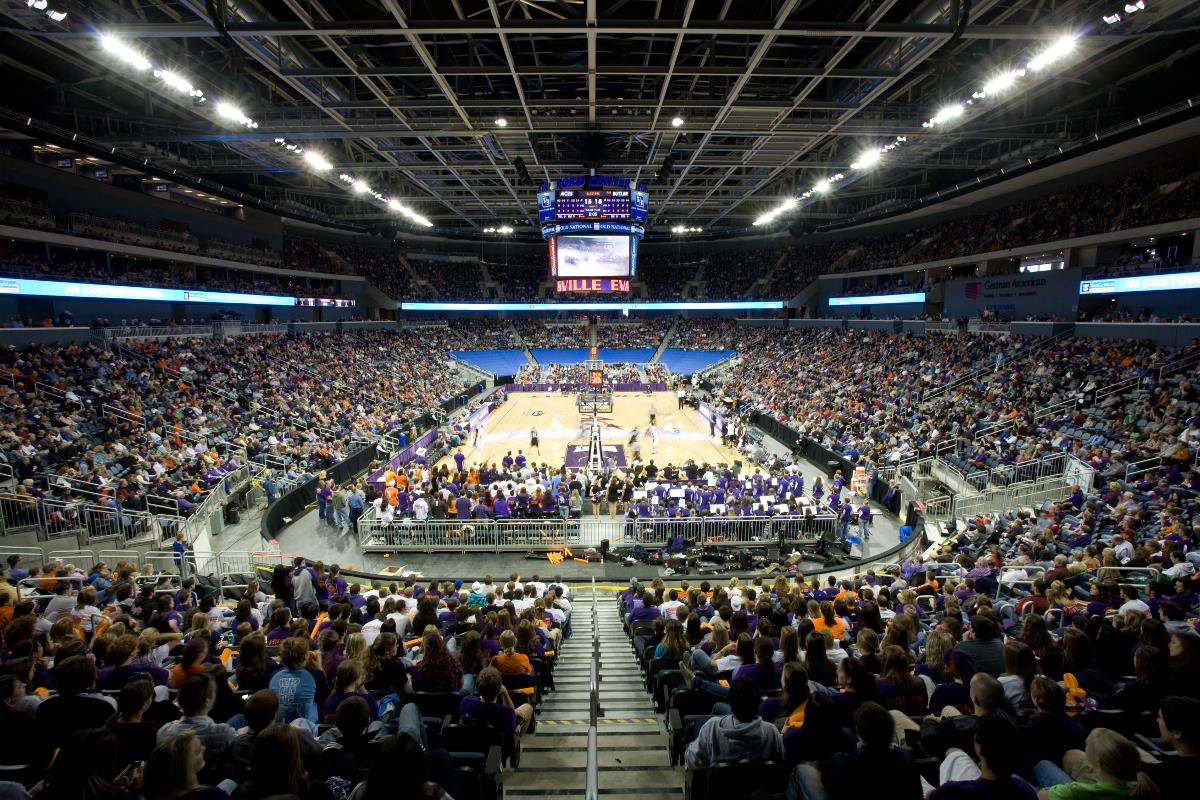 With its famous Greensboro Coliseum Complex and other facilities, Greensboro is willing and able to host any sports tournament that comes its way.

The city of Greensboro started out as the most important Quaker settlement in North Carolina and has continued to be steeped in history ever since. Named for Revolutionary War General Nathanael Greene. Greensboro played an interesting part during the end of the Civil War and was the site of the infamous Greensboro sit-ins, a series of nonviolent protests in 1960 which helped spark desegregation in the state. The city has been known throughout its history as well-planned and economically strong, maintaining growth through the Great Depression. Traditionally known for textiles and tobacco, the Greensboro’s centralized position in the state has attracted many local businesses in trade and transportation. 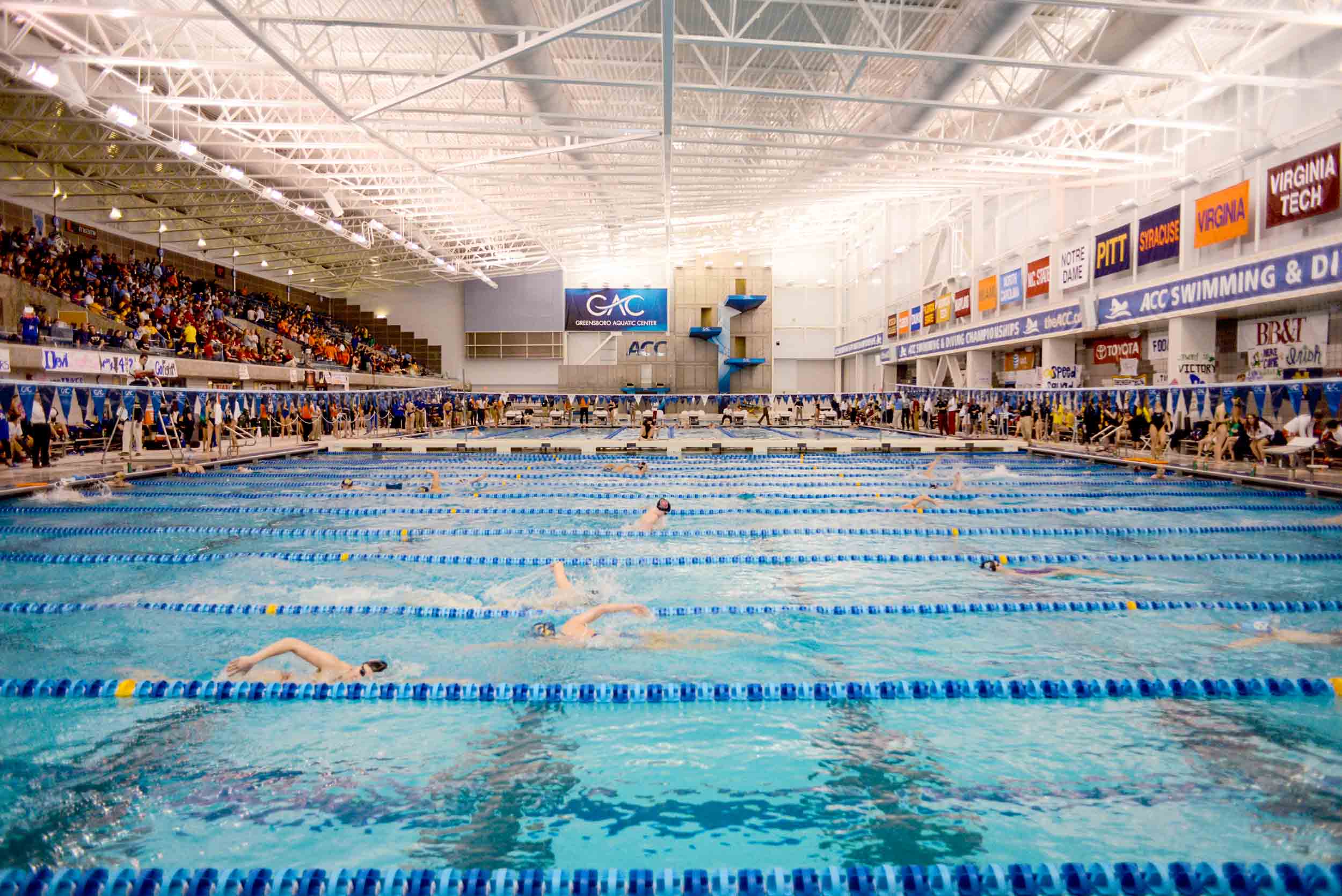 The Greensboro Aquatic Center is a 78,323-square-foot facility with a long history of hosting national swimming meets. Located in the Greensboro Coliseum Complex and only one minute from the Greensboro Visitor Center, it offers plenty of lodging and eating options in the surrounding area. The Aquatic Center has five, seven, and 10-meter diving boards and a 25-yard pool that can be transformed into 10 different configurations based on event needs. A new pool is set to open in August of 2019. In the past, the facility has hosted the U.S. Synchronized Swimming 2012 Olympic Team trials, the 2012 U.S. Masters Swimming Spring National Championships and the 2019 USA FINA Synchronized American Open. 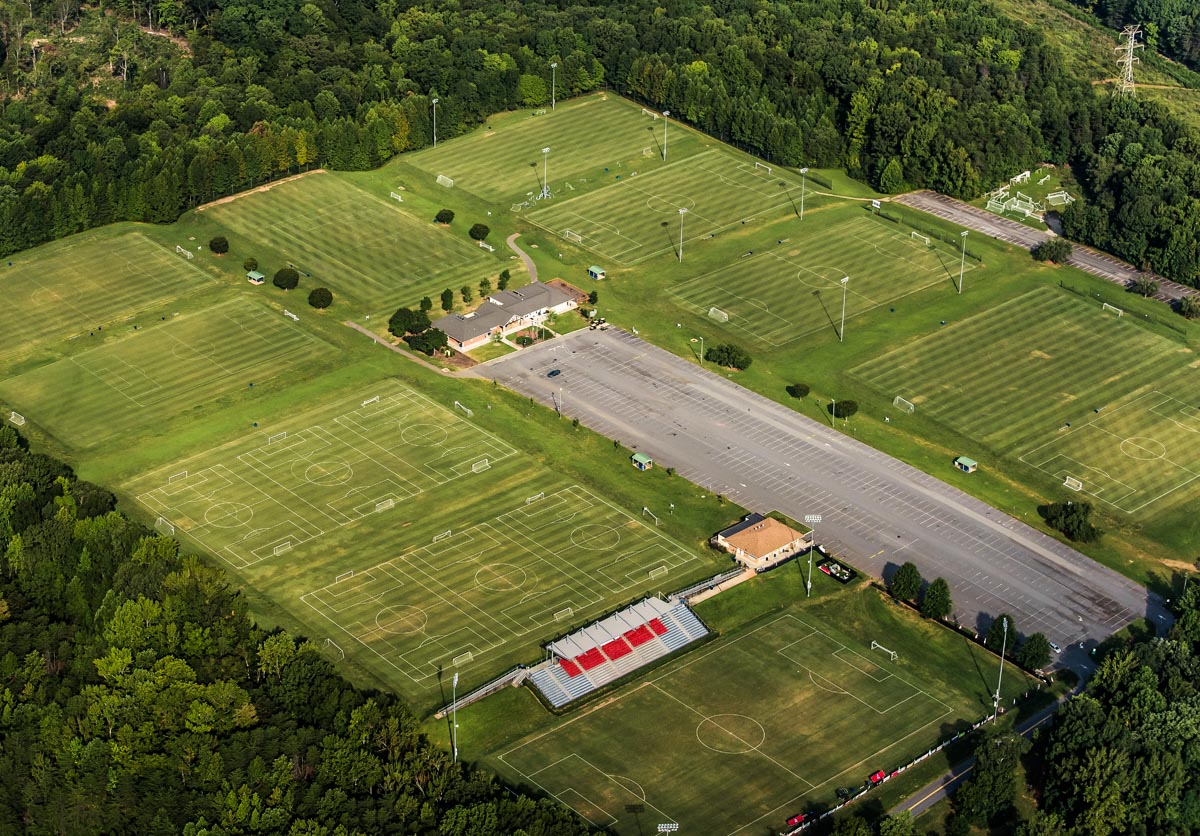 BB&T Soccer Complex at Bryan Park offers 21 soccer fields including Macpherson Soccer Stadium, a European-roof-style stadium capable of sitting up to 3,000 spectators. Among its fields include two state-of-the-art all-weather fields, with the rest being Bermuda grass style fields. Lights are offered for night games. Concessions provided by Subway are available onsite, along with an athletic training room, a full-service field house with lockers rooms and meeting rooms and an award presentation stage. The facility will host the Elite Club National League Girls National Playoff and the U.S. Soccer Development Academy girl’s academy soccer showcase last year. 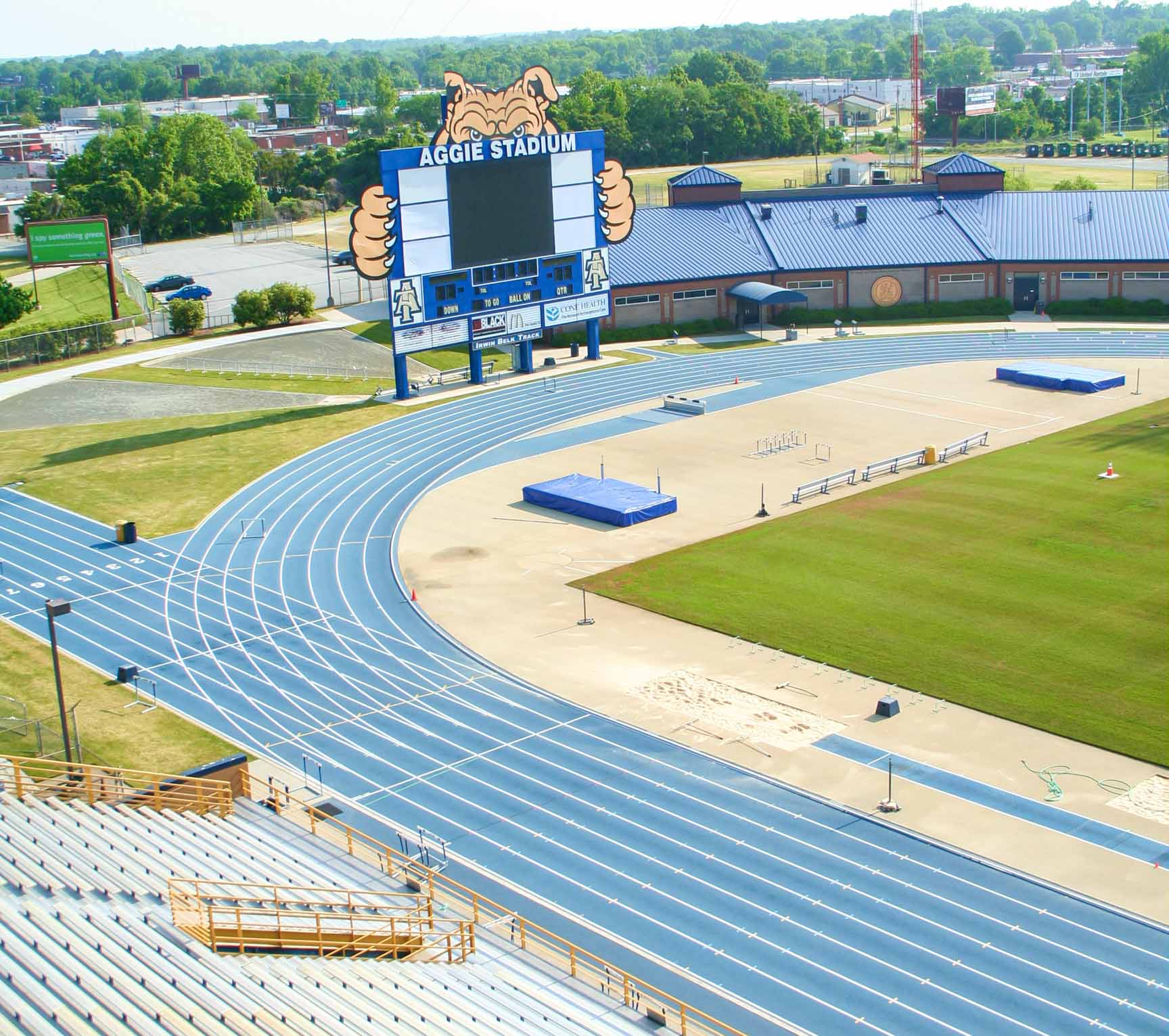 An IAAF-certified track, Irwin Belk Track stands in a prime location located only 12.9 miles from the airport and two miles from downtown Greensboro. The track previously played host to the 2009 Junior Olympics and has hosted the National Scholastic Sports Foundation’s Track & Field event numerous times. Home of the NC A&T Aggies and capable of seating 23,000 spectators, it is a Mondo Super X Performance track with eight lanes as well as javelin and discus throwing areas. The space also offers 10,500-square-feet of coach offices, locker rooms and hospitality rooms. 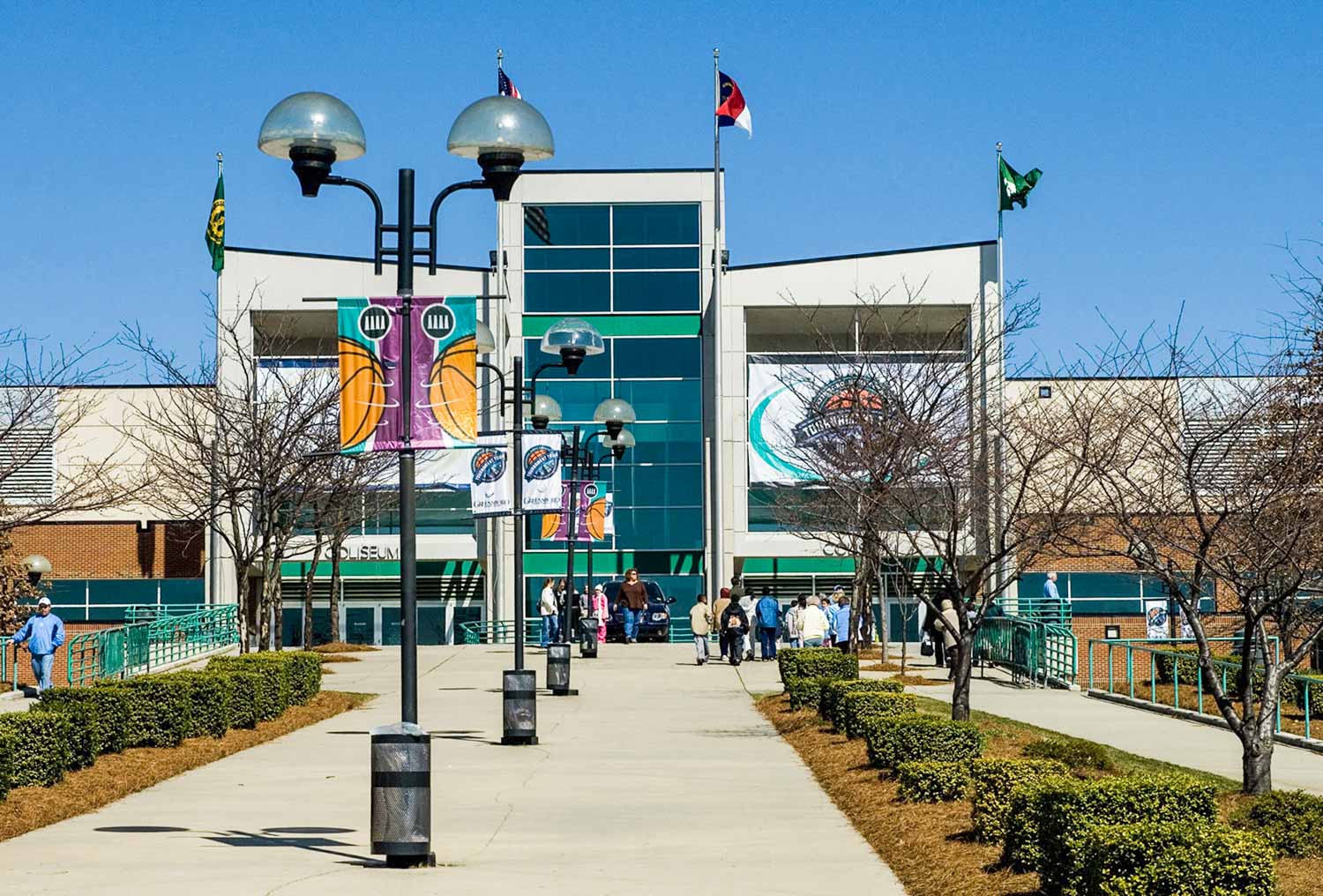 The Greensboro Coliseum Complex is a multi-building facility with eight different venues that offer unique opportunity to host nearly any sporting event one could think of. The main staple, the Greensboro Coliseum, can seat anywhere from 4,500 – 22,000 people depending on the need and has hosted NCAA and ACC Men’s and Women’s basketball tournaments in the past. Other venues within the complex include the Fieldhouse— a state-of-the-art structure that features a 30,000-square-foot, column-free area and currently houses the Greensboro Swarm NBA G League team—and the Special Events Center, a 167,000-square-foot space that includes three exhibits halls. The Complex will host the ACC Men’s and Women’s Basketball Tournament in 2020. Additionally, it was one of the sites for the AAU Junior Olympic Games this summer and hosted the USA Gymnastics American Cup back in March.

One of the busiest tennis venues in North Carolina, Spencer Love Tennis Center is getting a major upgrade in several phases. Phase I, which has just been completed, houses 13 clay courts. Phase II will increase the number of courts (from 13 to 18), renovate the existing tennis building, add a shade structure to the north end of the tennis building and convert the tournament court to quick-start courts. A possible Phase III is also under consideration.

Things to do in Greensboro

The Greensboro Science Center offers a three-in-one experience to any lucky groups that have a chance to visit it with a zoo, aquarium, and museum all in one location. Spend some time checking out red pandas, Nile crocodiles, and black howler monkeys at the Animal Discovery Zoological Park as it takes you around the world with its exotic creatures. Dive deep in the ocean with its aquarium to see a collection of penguins, otters, jellyfish and more. Don’t miss its museum’s unique exhibits like its Realm of Dragons or Time Warner Cable’s Extreme Weather Gallery.

Don’t miss the chance to connect with your animal instinct by checking out SKYWILD. A variety of zip lines, suspension bridges and climbs, SKYWILD offers 60 different challenges aimed at giving you an inside look into animal movement and behavior among the trees. Waddle, leap, brachiate) and crawl 45 feet above the Greensboro Science Center Zoo. With seven different courses and three intensity levels, there’s something for everyone.

Take a break and find some fun in the sun with Wet n’ Wild Emerald Pointe, one of North Carolina’s largest waterparks. With over 30 water attractions and three million gallons of water, the park is sure to take the heat off any day. Go for a swim in the park’s giant wave pool and experience tsunami waves up to 84-feet wide or relax and unwind in the Lazee River. Embrace the inner thrill-seeker and take a 76-foot drop in Daredevil Drop or walk the plank at Shipwreck Cove. No choice is wrong when it comes to a day at the water park.

In the market for antique china or just looking to get a glimpse at the world’s largest china shop? Take a trip to Replacements Ltd, This unique store has around 11 million different pieces in its inventory for anyone looking to replace, complete, or buy a set of fine china, silverware and more! The showroom offers a chance to see some of the companies 2,000 rare pieces like White House dinnerware used by President Harry S. Truman. The store even allows well-behaved pets to come along, leaving no excuse not to check it out.

Having served an important role in the civil rights movement, Greensboro is now home to the International Civil Rights Center & Museum, a must-see for any visit. Explore the history of the movement through the museum’s 14 signature exhibits with artifacts, video reenactments and interactive components. The museum is built on the same spot as the Woolworths where the Greensboro sit-ins first occurred. Facility Spotlights

A heartfelt thank-you to Henri Fourrier and our primary contact Brian Ambuehl at the Greensboro CVB office for seeing the incredible value in youth sports. From the very beginning, their insight and service have been a guiding force in NC AAU consistently growing our event base in the Gate City.

How to Get to Greensboro

By Car: I-85, I-40 and I-73/74 are three major interstates that converge in Greensboro, making travel by car simple. The city is also just a five-hour drive from both Atlanta and Washington, D.C.