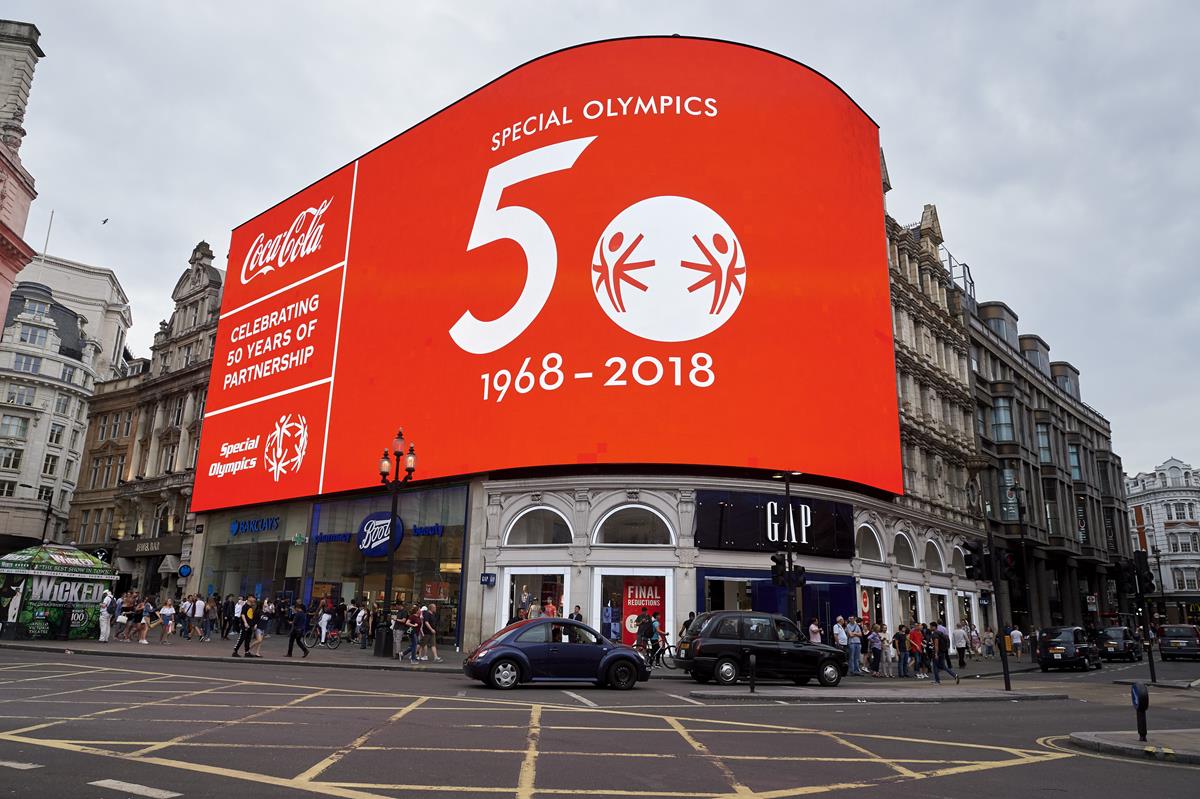 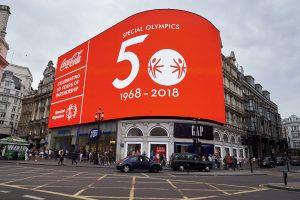 The iconic advertising sign on Piccadilly circus in central London is showing animation to mark  Inclusion Day on July 20, 2018. Light Up for Inclusion is part of the Special Olympics’ 50th anniversary celebrations and represents a global display of unity with more than 170 landmarks across the world being lit up in red. Photo courtesy of the Special Olympics

For 50 years, the Special Olympics have been a global movement that highlights the human spirit through the transformative power of sport.

The world’s largest sports organization for children and adults with intellectual disabilities, the Special Olympics provide year-round training and competitions to more than 5.7 million athletes and United States sports partners in 172 countries.

This year, the Special Olympics returned to the city of its birth, Chicago, from July 17-21, where the organization debuted the inaugural Unified Cup.

The Unified Cup featured top athletes from around the world, with and without intellectual disabilities, competing in an international soccer tournament. Twenty-four teams from 21 countries squared off at Toyota Park in Bridgeview, a city located 15 miles southwest of Chicago. The event was broadcast live on ESPN 2. 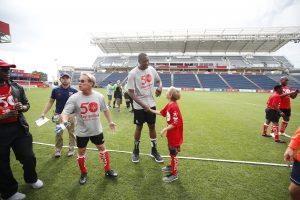 Dikembe Mutombo greets a young fan during the celebrity game on July 20, 2018. Photo courtesy of the Special Olympics

Drogba became a Special Olympics Global Ambassador in 2018, and his presence created a stir as athletes clamored, virtually nonstop, to take photos with him.

“Working with the Special Olympics has been great,” Drogba told Sports Planning Guide. “I’m very proud to be a part of this. (The Special Olympics) brings people together and forms a community. The Unified Cup is the best ambassador for inclusion in sports.”

Once the celebrity matchup concluded, the women’s tournament concluded with Slovakia beating Brazil 2-1. Slovakia toppled Korea 2-0 in the semifinals to reach the title game.

While Brazil was downtrodden after the defeat, the players rebounded in the event’s aftermath, as athletes from all countries mingled, leading to Brazil’s men’s and women’s players bursting into an impromptu dance party while shouting their country’s name in a joyous tone.

“We played our best but we came up short,” said Emanuelle de Souza, an athlete on the Brazilian squad. “We are happy. Not because we lost, we wanted a gold medal. But we are happy to be here representing Brazil. It’s been fun playing, hearing the cheers from the crowd and being with our teammates.”

The Brazilian team returns to its locker room after a hard-fought battle.

Slovakia was understandably more upbeat after the championship game as they cheerfully accepted their gold medals.

“This has been a great event,” said Veronika Slukova of the Slovakian team. “I’ve always dreamed about coming to America and Chicago is the most beautiful city I’ve ever seen.”

On the men’s side, Ecuador edged Uruguay 1-0 to claim the Division 1 championship.

“I want to share this victory with any people who have disabilities,” said Ecuador’s Luis Ortiz. “I want them to know I’m there for them.”

The Unified Cup was the athletic capper to a Special Olympics event that included a host of other activities, including a law enforcement torch run in Chicago that featured hundreds of law enforcement officers and Special Olympics athletes from around the world, and an eternal flame of hope ceremony in which a permanent, 30-foot monument designed by renowned artist Richard Hunt was lit at a dedication ceremony.

The festivities also included a Global Day of Inclusion at Soldier Field in Chicago, a massive celebration and family-friendly festival that included sports activities, games, exhibits, food and live entertainment; and a 50th anniversary celebration concert in Chicago that included artists like Chance the Rapper, Usher, Smokey Robinson, Jason Mraz, O.A.R, Francis and the Lights and Daya.

Perhaps the most spectacular element that accompanied the Special Olympics was the event’s Light Up for Inclusion in which more than 225 major landmarks, stadia and iconic buildings across the world turned red as part of a global display of unity representing the dawn of the Inclusion Revolution. 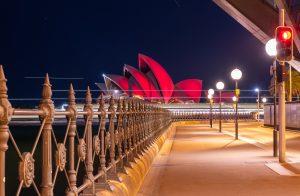 Among the landmarks that were illuminated included the Empire State Building in New York City; the London Eye in London, England; the Sydney Opera House in Sydney, Australia and Niagara Falls in upstate New York and Ontario, Canada.

The host city of Chicago lit up numerous buildings, including the Prudential buildings, the Willis Tower, the Wrigley Building clock tower, the Navy Pier Ferris wheel, the Chicago Board of Trade and the John Hancock Center.