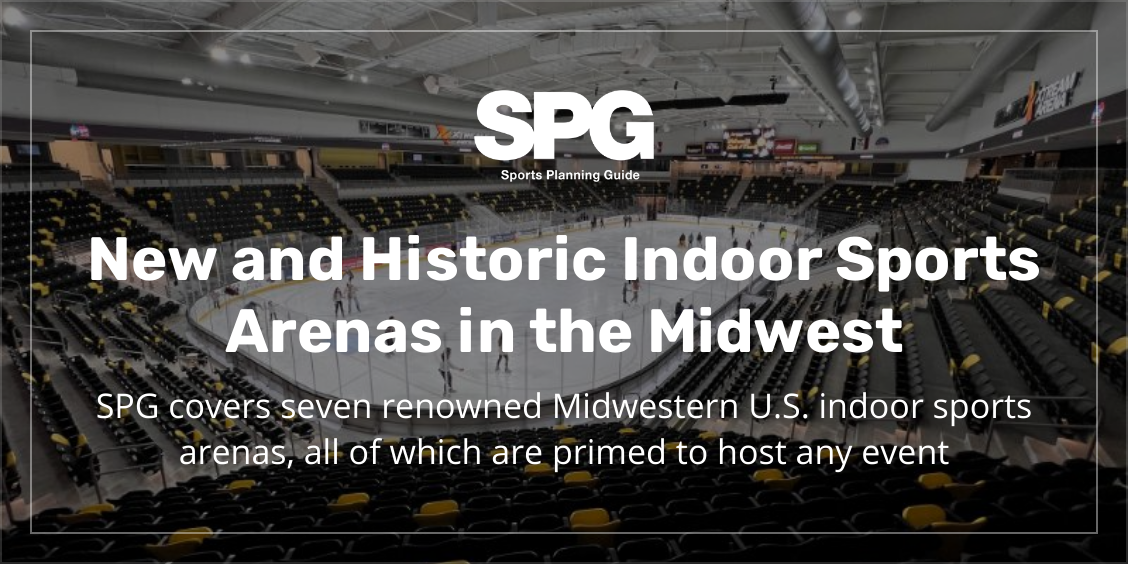 SPG covers seven renowned indoor sports arenas in the Midwestern United States, all of which are primed to host any event.

From the court to the ice, pro wrestling rings and more, indoor arenas play an important role to the tourism industry with their adaptability for sports and entertainment events. Indoor arenas provide climate-controlled fun for all visitors, without the worry of weather-related delays or cancellations. In the Midwest particularly, where weather can be unpredictable any season, this can be a critical safety net. To help event planners with the venue selection process, SPG has compiled a list of seven premier indoor arenas in the Midwest. 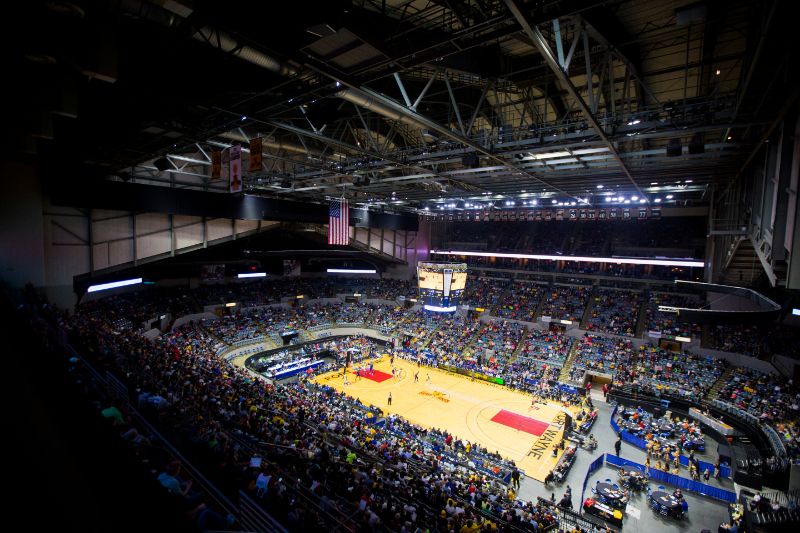 Fort Wayne’s historic Allen County War Memorial Coliseum features over $35 million in renovations within the past two decades. Originally built in 1950, the arena now has a capacity of 13,000 for basketball and up to 10,480 for hockey. Other upgrades brought in LED lighting as well as further upgrades to the 200 Level.

Allen County War Memorial Coliseum has been the home of ECHL side the Fort Wayne Komets since 1953, as well as the Mad Ants D-League team since 2007. The arena is a short drive from an I-69 exit into the city. For those traveling in from further away, Fort Wayne International Airport is less than 30 minutes south. 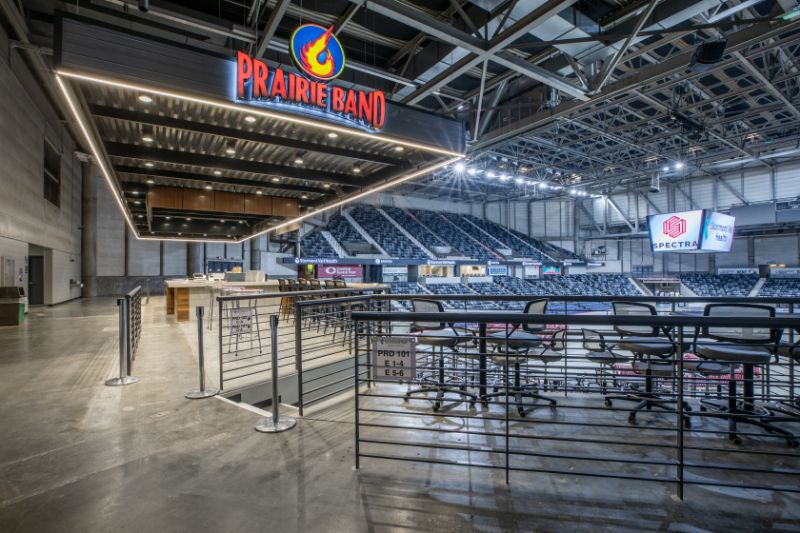 Landon Arena has excellent views of the action from any area.

Part of the Stormont Vail Events Center in Topeka, Landon Arena is a premier facility for indoor sports and events. The arena has a capacity of up to 7,100 for sports like ice hockey, and can allow up to 10,000 for other events like concerts. Built in 1987, Landon has undergone upgrades to feature state-of-the-art sound and LED lighting systems. It also has center-hung ribbon and endwall video boards.

In addition to hosting many professional and amateur teams over the decades, Landon Arena is the home of arena football side the Topeka Tropics of the CIF. Landon Arena at Stormont Vail Events Center is conveniently located in the heart of Topeka. Multiple routes will get you there, including I-70 and I-470. The nearest airport, Topeka Regional, is only 15 minutes away. 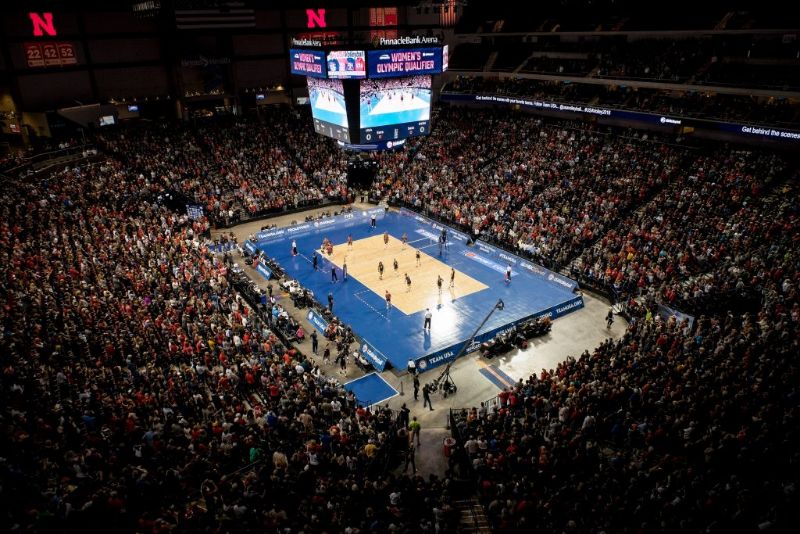 Team USA Women’s Olympic Qualifiers for volleyball at “The Vault.”

Nicknamed “The Vault,” Pinnacle Bank Arena in Lincoln unlocks great potential for tournament planners with 15,500 seats. Home to Huskers Men’s and Women’s basketball, the arena also hosts a number of other major events such as the FIVB Volleyball Nations League and high school tournaments. Along with 36 founders and executive suites, The Vault features 20 premium loge boxes and two private club lounges.

Pinnacle Bank Arena is one of the most sustainable buildings of its kind in the U.S., with high-efficiency materials to reduce energy usage and costs by around 35-percent. The Vault is located close to I-180 in the West Haymarket District. If you’re flying in from out of state, the nearest airport is only 10 minutes away. 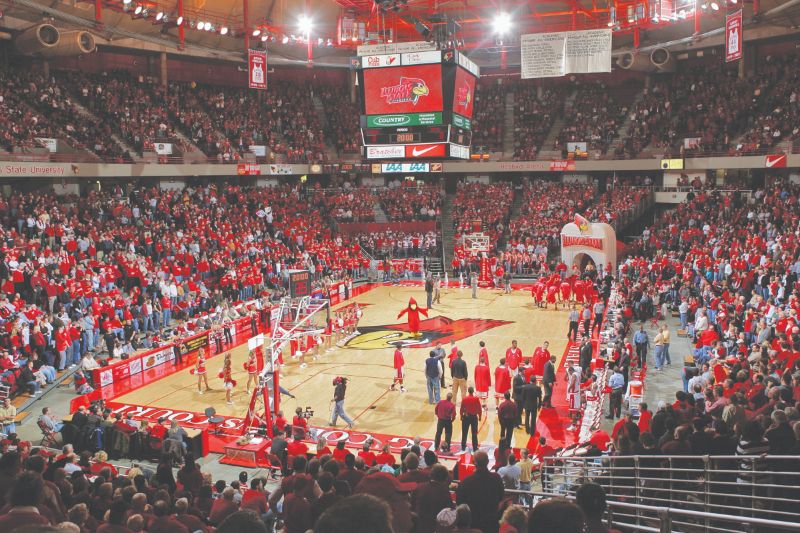 ISU basketball players take to the court at Redbird Arena.

Located on the campus of Illinois State University, Bloomington-Normal Metro’s Redbird Arena is home to Redbirds basketball and volleyball. With a capacity of 10,200, there’s plenty of space for a variety of sporting events. In addition to the arena’s center-hung HD scoreboard, one of its greatest features is in its design to keep fans close to the court. This has earned Redbird Arena plenty of praise, including the Champaign News Gazette dubbing it “the best basketball arena in the state.”

Redbird Arena also hosts many Illinois High School Association events. The girls’ volleyball tournament for example has been a regular at the arena since 1990. Getting to Redbird Arena is easy with close access to I-55 and I-74. The nearest airport for those traveling from afar would be Central Illinois Regional in Bloomington. 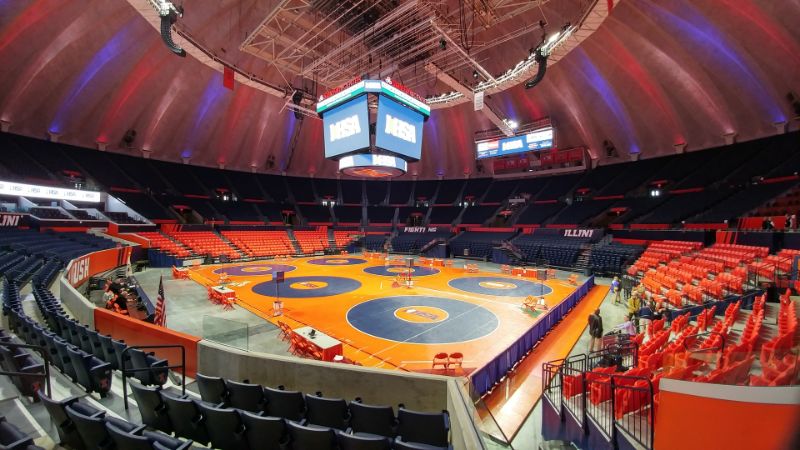 State Farm Center in Champaign County is a premier indoor arena with a deep history of hosting major events. Home to Fighting Illini basketball, it features 15,500 seats with a capacity of up to 16,500 spectators. Originally opened in 1963, the University of Illinois opted for significant renovations, opposing a new building since State Farm Center is architecturally appealing and was designed by alumnus Max Abramovitz. Since 2014, the arena has added loge seating, luxury suites, a state-of-the-art backstage area and more.

In addition to NCAA intercollegiate sports, State Farm Center has also hosted pro wrestling, gymnastics, and many other major events. To get to the arena in Champaign there are multiple routes, including I-57, I-74 and I-72. 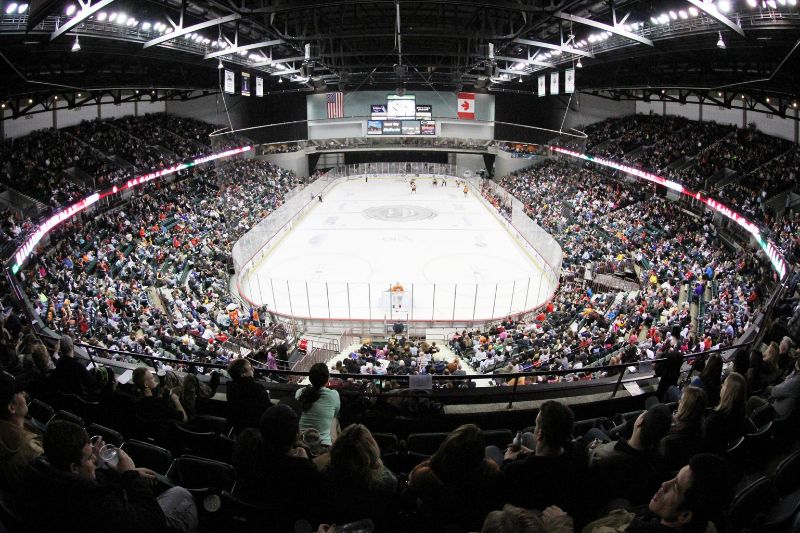 Located in Moline, Illinois, part of the Quad Cities region in Iowa and Illinois, TaxSlayer Center is capable of hosting multiple sports events. Seating capacity varies based on the sport with a maximum of up to 12,000 spectators.

Sports such as ice hockey seat a little over 9,000. Architecturally, TaxSlayer Center is a gem, having won numerous industry awards. The arena features luxury suites, automatic video scoreboards with replay and a quality PA system.

Home to IFL arena football side the Steamwheelers, as well as Storm hockey of the SPHL, TaxSlayer Center has also hosted numerous intercollegiate tournaments. Getting to the arena is easy as it’s close to an I-74 exit. Quad City International Airport is only 10 minutes away for those traveling in from afar. 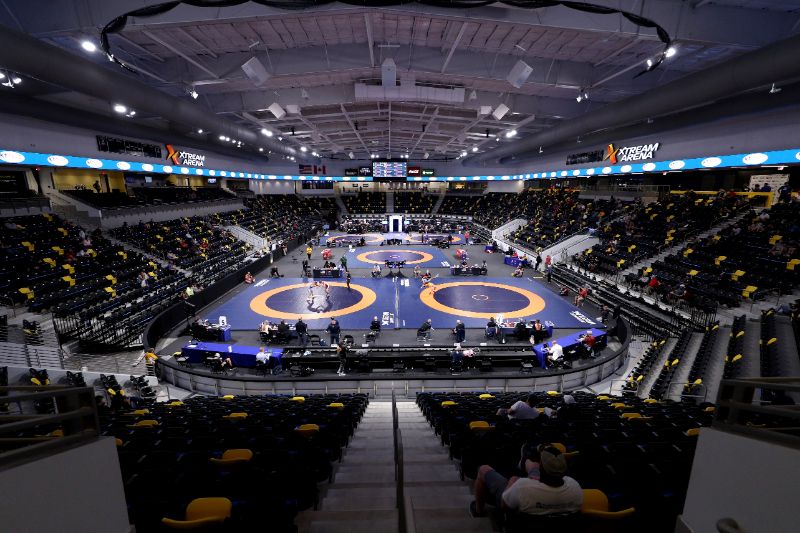 Opened in 2020, Xtream Arena in Coralville is a state-of-the-art venue perfect for amateur and professional sports and events. Home to ECHL side the Iowa Heartlanders and Hawkeyes volleyball, the arena has 5,100 fixed seats with a capacity of up to 6,600. Industry-leading Daktronics LED video and ribbon displays are featured, along with colorful LED lighting to make any event stand out—particularly sports introductions.

Xtream Arena is part of the Iowa River Landing, a premier cultural and entertainment district in the heart of Coralville. Adjacent to the Green State Family Fieldhouse, the area holds even more sporting event opportunities. To get there, a quick hop off of I-80 will only take a few minutes. The nearest airport is about 20 minutes north along I-380, just south of Cedar Rapids.