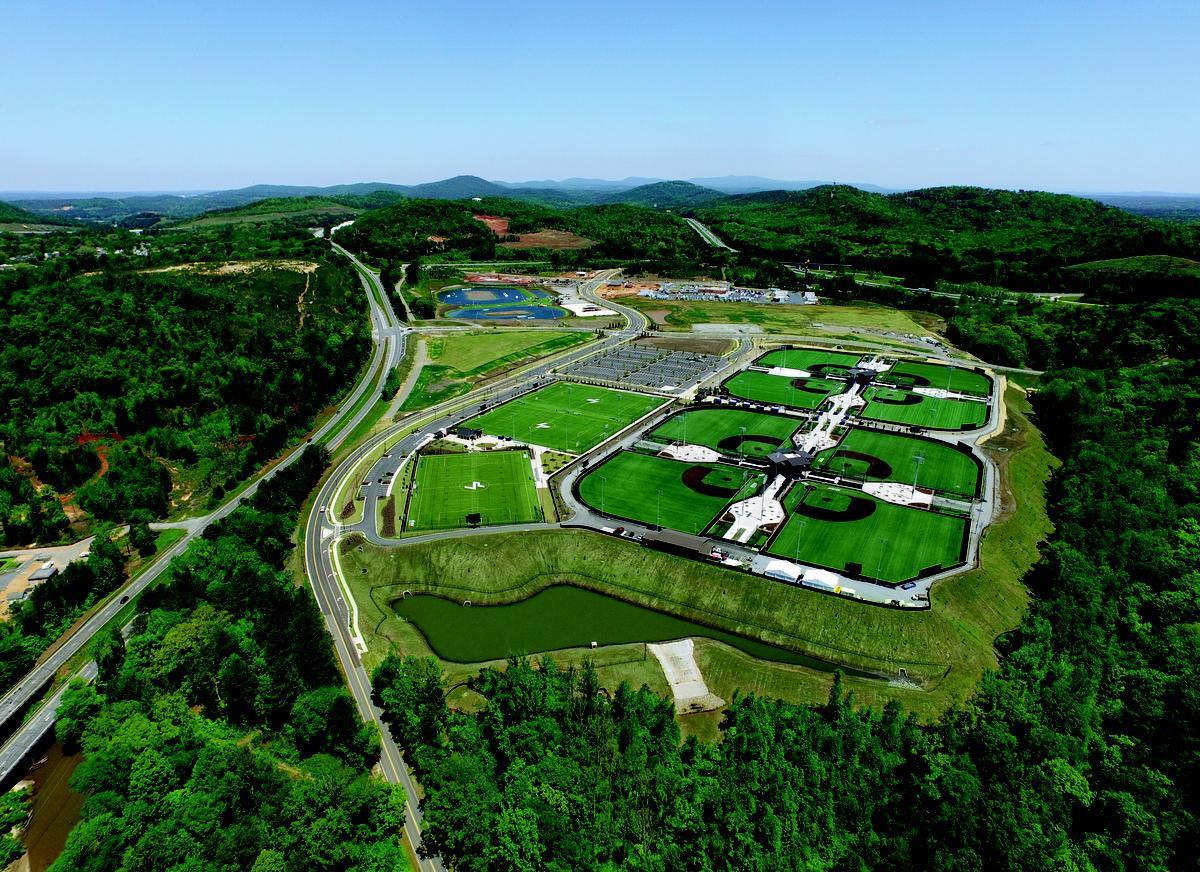 Spooky Nook Sports was funded privately by its owner, Sam Beiler, for approximately $11.25 million. After traveling for his daughter’s various sports tournaments across the country, the family decided to create an indoor facility that offers quality customer service, ideal playing and spectator conditions and additional activities during downtime.

The nation’s largest indoor sports complex comprises more than 700,000 square feet under one roof. It offers 10 hardwood basketball courts, six tennis courts, four field hockey courts, 10 volleyball courts and six soccer fields, as well as a full-sized baseball infield and batting cage area. Its outdoor component features a water-based turf field and climate-controlled dome (one of only two of its kind in the world.) Other amenities include a 10,000-square-foot fitness center, climbing center, Clip n’ Climb (the only one of its kind in the nation), meeting and banquet spaces, a food court and arcade. Spooky Nook Sports has an on-site hotel, The Warehouse Hotel, with 135 guest rooms and a 175-seat restaurant and bar, Forklift and Palate Restaurant.

With forecasted attendance of over 925,000 in 2015, Spooky Nook Sports continues to see strong growth and has created more than 400 jobs. In 2014, Spooky Nook contributed more than 10,000 room nights to area hotels and made a positive economic impact throughout Lancaster County and the surrounding community. Hotels, restaurants and area shops reported double-digit growth during peak times of the year in terms of traffic and revenue.

LakePoint Sporting Community was privately funded until it received a $32-million bond to support the next development phase: the indoor facility.

Currently yielding over one million visitors in its first year, LakePoint is on track to be one of the world’s largest destinations for travel sports. To date, LakePoint’s economic impact is $80 million in direct spending, $5.75 million in taxes and 1,500 jobs created. The average non-resident spends $122.15 per night, at a rate of a 14-person party size. The local community has seen a 10 percent year-on-year profit increase as a direct result of “The LakePoint Effect.” For instance, in its first week of opening, a National Quick Service Restaurant served more than 3,000 customers. Upon completion of the indoor facility, the local community will see a rise in jobs, up to 200, and in visitor traffic, up to one million.

Round Rock Sports Center was funded by revenue bonds, city self-financing and hotel occupancy taxes for a total of $14.9 million.

Round Rock Sports Center spans 82,800 square feet of indoor space with 47,775 square feet of flexible, open space. Several configurations are available, including six high school basketball courts, 12 high school volleyball courts or three NCAA basketball courts. Other amenities include ceiling-mounted basketball goals; divider curtains; Bio-Cushion Classic maple flooring system; HD video wall for displaying brackets, promotional videos or live sporting events; 12 60-inch LCD scoreboard displays programmable by court or linkable by sport; upper-level, VIP-style spectator seating; a training room, tournament room, players’ lounge and referees’ lounge; three multipurpose rooms that can be subdivided into nine; and a concession service and seating area. There is seating for over 1,400 with a capacity of 3,053, and over 500 parking spots. In addition to its indoor features, Round Rock Sports Center has a covered pavilion with a multi-sport turf surface, playground, concession area and restrooms, and an open-air plaza with a play area and tailgating area.

The center’s most notable events are Heart of Texas National Qualifier Wrestling, Joola National Table Tennis Tour and Austin Juniors Tour of Texas Power League Qualifier, which was hosted five days after the doors first opened and was the largest event Round Rock has hosted in terms of number of teams and spectators.

Grand Park was municipally funded and received $45 million to create the venue.

Spanning more than 400 acres, Grand Park offers a total of 31 multipurpose fields, 120 by 90 yards each. Seven fields are synthetic, eight are lighted and two are stadium fields. The park also features 26 baseball/softball diamonds, eight of which are synthetic (four full-size and four junior-size). All diamonds have bleacher seating. Other amenities include seven concession stands with restrooms, state-of-the-art irrigation and drainage for rain play, 3,500 parking spaces and two 6,000-square-foot operations buildings. A 370,000-square-foot indoor facility set to open July 1, 2016 will house three full-size multipurpose fields, 115 by 75 yards each, with space for spectators. The facility will also include a 45,000-square-foot warm-up area, 30,000-square-foot mezzanine concourse for spectator viewing, a 3,500-square-foot meeting room, 1,500 square feet of additional meeting space, and food and beverage services.

Grand Park is expecting 1.2 million visitors by the end of 2015. In 2014, the park saw 510,000 visitors from 48 contiguous states and Canada, and the direct, visitor-generated economic impact totaled $43 million.

Nathan Benderson Park (NPB), owned by Sarasota County, was funded through a public-private partnership. A portion of the public funding came from tourist development tax funding. The total cost to date is $35 million.

NPB began hosting events in 2009, but was officially opened to the public as a county park in 2014. The 600-acre park comprises a 400-acre lake and a 2,000-meter sprint rowing course. Amenities include coaching lanes, a wave attenuation system, starting huts and grandstands. The lake’s perimeter is just over five kilometers and features a 15-foot-wide paved path. Regatta Island is the 30-acre event epicenter in addition to an athlete village, vendor village, boat launch, event headquarters, hospitality tent, ample parking and spectator viewing. Construction for a permanent finishing tower broke ground in August 2015.

In the past year, NBP has generated $26.8 million in direct economic impact to the region and has filled 22,600 hotel room nights. This impact was generated from 33 events including regattas, stand-up paddleboard races, dragon boat races, a Pentathlon World Cup, triathlons, 5k races, and 31 different collegiate and club training sessions.

The $22-million project was funded through a joint venture agreement by the City of Gatlinburg (70 percent) and Sevier County (30 percent).

Economic goals were set at $10 million in the first year of operation; Rocky Top Sports World officials report a $17.5-million impact since opening.  The venue has produced 44 multi-day events, surpassing targets by 69 percent.

The $7-million complex was funded primarily through donations from community leaders, corporate donors and individuals from the general public. The land was sold through local county government at a substantial discount.

The complex features eight fields in two quads with more than 400 parking spaces. Quad A includes one 385-foot and one 350-foot field, both fenced with skinned infields, and a 385-foot fenced field with a grass infield and stationary mound. Quad A also features a Miracle Field, which is used by players with disabilities, as well as covered dugouts, restrooms, concessions and bleacher seating with 100 seats per side of each field. Quad B includes four 300-foot fenced fields with skinned infields, portable mounds and covered dugouts. Each field has bleacher seating for 100 per side and there is a restroom and concessions building. The Championship Field is a 385-foot, fenced, lighted field with grass infields and stationary mounds, along with covered dugouts and grandstand seating for 1,000. Phase II, when complete, will add a third quad (Quad C), which will be similar to Quad B, and warm-up areas, parking for an additional 400 cars, a championship softball field and youth baseball fields with fence distances of 225 feet.

The $12.5-million Myrtle Beach Sports Center was financed through local government bonds; initial funding came as a part of a state grant.

Its top events were Varsity Cheer-Spirit Sports, which takes place in the spring every year, Big Shots NCAA Certified Basketball and NTBA Boys National Championship, both occurring in the summer. Each event generated more than $2 million of economic impact and collectively accounted for over $200,000 in direct revenue for the Myrtle Beach Sports Center.

Myrtle Beach Sports Center has generated over $12 million of economic impact to Myrtle Beach and the Grand Strand Area. This number has surpassed the first year goal of $10 million of economic impact in five months of operation. Additionally, the facility has operated on the positive side of the balance sheet for its first five months. The center has seen 27,635 participants (coaches and players), and has sold 62,487 event day tickets (a combination of event passes and one-day tickets to spectators).