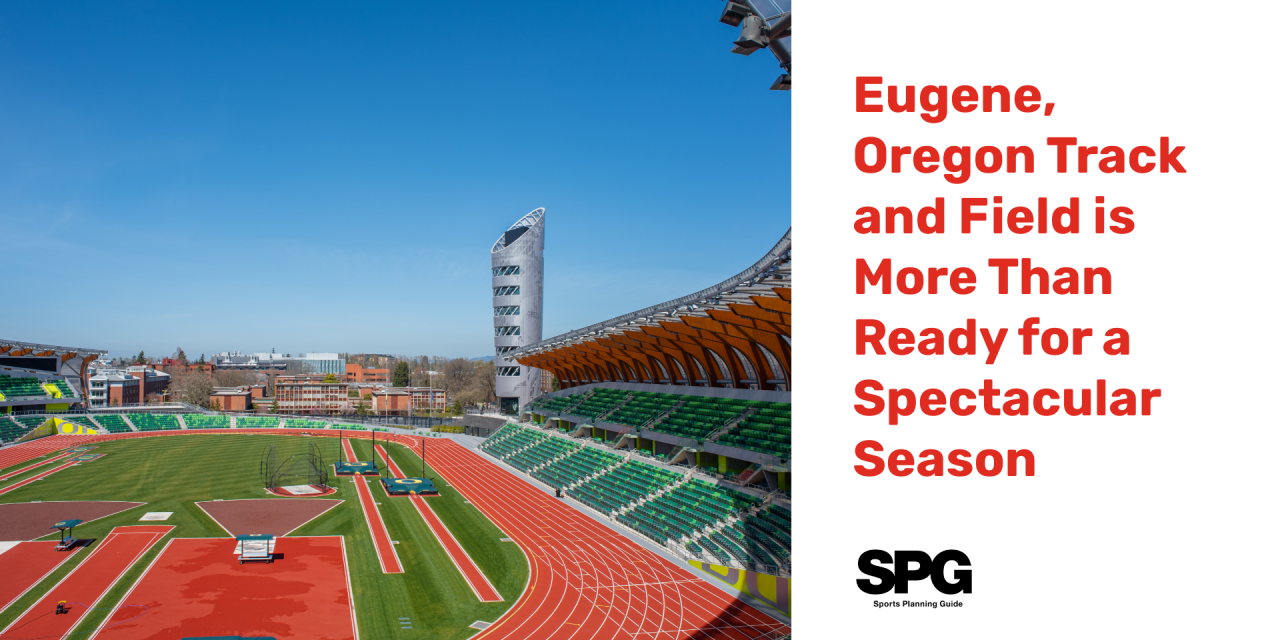 Living up to the nickname TrackTown USA, Eugene will host a number of premier track and field events

2022 is shaping up to be the greatest track and field year in the history of Eugene, Cascades and Coast and the entire state of Oregon. More than a dozen major track events are scheduled for the re-imagined Hayward Field at the University of Oregon, culminating with the World Athletics Championships Oregon22 in the summer—the first time it’s ever been held in the United States. To celebrate this exciting year, SPG has compiled a list of events, along with important information needed for preparation.

Track and field takes center stage with a packed schedule

As Spring blooms and begets warmer weather, so too does it launch the type of intensity that only track and field can bring. Of course Hayward Field takes center stage for these events, many of which are intercollegiate meets and championships.

To kick things off from April 1–2, the University of Oregon will host the Hayward Premiere. At the end of the month, the Oregon Relays will bring hurdle heats, long jump, javelin and more. 2022’s Oregon Twilight on May 6 should be yet another exciting iteration—the 2021 event having seen multiple records broken.

The rest of the month will see more excitement with the Pac-12 Championships from May 13–15, as well as the premier Prefontaine Classic on May 28. The “Pre Classic” is an Oregon Track Club event and part of the elite track and field Diamond League. Founded nearly 50 years ago, the event draws a world caliber field of athletes to compete at Hayward Field. 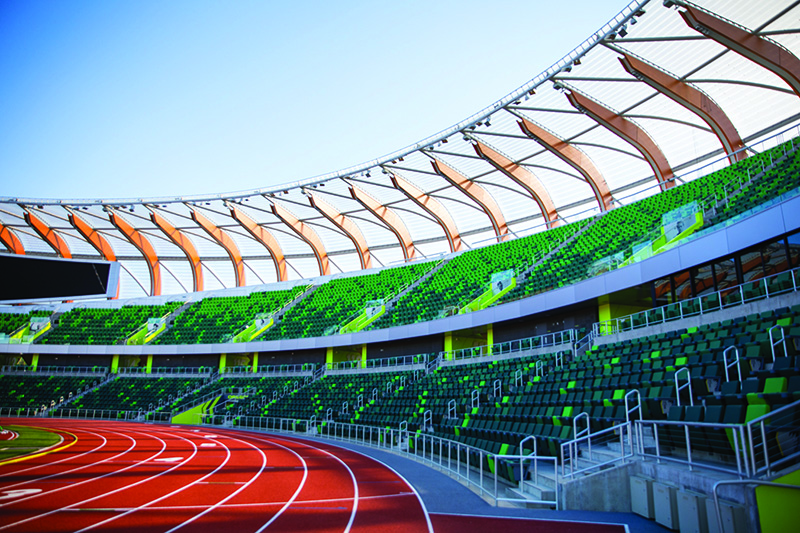 Hayward Field’s new stadium seating beams like its immaculate track, with the contrasting, striking green of U of Oregon.

Following the NCAA Championships from June 8–11, Eugene and Hayward Field will be the first in the United States to host the World Athletics Championships Oregon22 (WCH OR22) from July 15–24. Two thousand of the best track and field athletes from 200 nations and territories across the globe will convene in Eugene for an unmissable experience.

Started in 1983, the World Athletics Championships is the most prestigious event in the sport, taking place every two years. The United States will be defending its reign at Hayward Field, having won the most medals the past two events in Qatar and the United Kingdom for a total of 13 top of the table victories. As athletes, staff, media and spectators enjoy the exciting action, they will surely be stunned—not only by Hayward Field but the city of Eugene, Cascades and Coast.

Hayward Field and its history

Originally opened in 1919 for football, Hayward Field adapted to host track two years later with the addition of a six-lane cinder track. An increase to eight lanes decades later also came with an all-weather synthetic surface. This Pro-Turf urethane and sand composite’s hard surface made for excellent running conditions. Many world records were set at Hayward, several of which were by legendary Oregon native Steve Prefontaine, and so the stadium’s reputation as the world’s fastest track spread like wildfire.

Many renovations to maintain Hayward Field as the theater for track improved the stadium significantly over the decades, but none have so significantly as their recent renovations in 2018. Two years later, after demolishing the old grandstands, a state-of-the-art stadium was constructed around the track for a superior all-round experience. The main donor to these renovations was Phil Knight, the former track athlete who co-founded Nike while attending the University of Oregon with coach Bill Bowerman.

In addition to many NCAA Championships, Hayward Field has a long history of hosting other major events. The Olympic trials have been hosted there in 1972, 1976, 1980, 2008, 2012, 2016 and 2020. Numerous USA Track and Field (USATF) events have been hosted, including the USATF Championships on seven different occasions with the latest being in 2015.